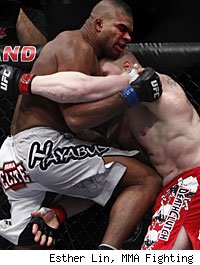 Alistair Overeem has been a wrecking machine for the last few years, winning eight straight MMA fights and five straight kickboxing fights without really even being threatened. Overeem doesn't just win, he wins in dominant fashion.

So after his most recent dominant win, over Brock Lesnar at UFC 141, Overeem has climbed another rung up the ladder of our heavyweight rankings, moving into the No. 2 position, behind only UFC heavyweight champion Junior dos Santos.

There's still a lot we don't know about Overeem: How will he react to fighting dos Santos, an opponent who hits just as hard as he does? How would he do if a good wrestler put him on his back? Does he have a good enough gas tank to last deep into a five-round title fight?

But what we do know about Overeem is that he has just concluded a 2011 in which he beat Fabricio Werdum and Brock Lesnar. Among heavyweights, only dos Santos beat better opponents than that last year, and only dos Santos ranks ahead of Overeem in our newest Top 10, after the jump.

Top 10 heavyweights in mixed martial arts
(Editor's note: The individual fighter's ranking the last time we did heavyweights are in parentheses.)
1. Junior dos Santos (1): As great a striker as Overeem is, I favor dos Santos in their eventual heavyweight title fight because I think dos Santos will prove to be quicker to the punch and capable of out-landing Overeem. I don't think Overeem is the man to take the title from dos Santos.

2. Alistair Overeem (3): The last time Overeem lost an MMA fight, it was to Sergei Kharitonov in 2007. Overeem is a completely different fighter now than he was then -- physically he has undergone a transformation that has seen him put on about 30 pounds of muscle, and he's a much more effective striker now. It's remarkable how far Overeem has come.

3. Cain Velasquez (2): Although dos Santos quickly dispatched Velasquez in their November fight, Velasquez has the combination of wrestling pedigree, athletic ability and heavy hands that makes him a threat to take the title back from dos Santos, something I could easily see him doing in the coming year.

4. Frank Mir (8): After getting knocked around by Antonio Rodrigo Nogueira early in their fight, Mir did a great job of holding on, waiting for his opportunity and finding the winning submission. A fight with Velasquez next would make a lot of sense for Mir, and if he wins that he'd be next in line for a title shot.

5. Fabricio Werdum (5): Werdum will make his UFC debut against Roy Nelson at UFC 143, in a fight I expect him to dominate. Werdum is better in every phase of the sport than Nelson.

6. Daniel Cormier (6): Cormier will fight Josh Barnett, likely in the spring of 2012, in the Strikeforce Heavyweight Grand Prix final. Barnett will be Cormier's toughest test to date, but I expect Cormier to pass that test with flying colors.

7. Brock Lesnar (4): If Lesnar is really retired I'll remove him from the heavyweight rankings, but I'll keep ranking him for now while we see if he changes his mind. It would be easy to view Lesnar's MMA career as a disappointment considering how his losses to Overeem and Velasquez went down, but it was a lot of fun to watch this incredible physical specimen could dominate good opponents like Heath Herring, Randy Couture and Frank Mir, and I'll never forget the heart he showed in his comeback victory over Shane Carwin. He's been great for the sport.

8. Shane Carwin (7): Back injuries have taken a toll on Carwin's career. He's expected to return in mid-2012, but athletes in their late-30s with bad backs don't often return to top form.

9. Josh Barnett (9): Barnett has a huge opportunity to show against Cormier that he still deserves to be considered among the truly elite heavyweights in the world -- which he always was until his third failed drug test made him persona non grata in American MMA. Although the Strikeforce Heavyweight Grand Prix hasn't gone quite as planned, the Barnett-Cormier final is a great, great matchup.

10. Antonio Silva (10): Bigfoot has been inactive since his knockout loss to Cormier, but he should be a great addition to the UFC heavyweight division. He's currently recovering from shoulder surgery, and if the timing works out it would make a lot of sense to have him make his UFC debut against Carwin.