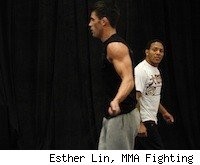 The UFC has finalized the main card for its debut on the FOX-owned cable channel FX with the addition of a bantamweight bout between Mike Easton and Ken Stone. The organization recently announced the news on its Web site.

UFC on FX airs Friday, Jan. 20, from the Bridgestone Arena in Nashville, Tenn. The four-fight main card on FX will be headlined by Jim Miller vs. Melvin Guillard. Also televised will be Josh Neer vs. Duane Ludwig and Pat Barry vs. Christian Morecraft.

Easton (11-1) won his UFC debut in October when he defeated Byron Bloodworth via second-round TKO. The win improved "The Hulk's" winning streak to six in a row.

Stone (10-3) picked up his first UFC win at UFN 25 when he defeated Donny Walker via first-round submission. Prior to the win, Stone had lost to Scott Jorgensen at the TUF 13 Finale and Eddie Wineland at WEC 53.

The Easton-Stone fight replaces Mike Brown vs. Vagner Rocha on the main card, which was scrapped after Brown pulled out of the fight due to a knee injury.

Below is a look at the entire UFC on FX card: