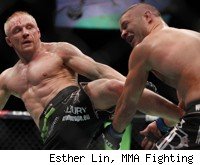 Former lightweight contender Dennis Siver is planning a move to featherweight in 2012, sources close to the fighter confirmed with MMAFighting.com. No word just yet on when the 19-8 German fighter will make his debut in the 145-pound weight class.

Siver's eventual move continues a trend of UFC lightweights dropping down to featherweight following the UFC-WEC merger in 2011. Other names who have made the switch include Kenny Florian, Tyson Griffin, Ross Pearson and Bart Palaszewski.

The five-foot-seven Siver recently had his four-fight winning streak stopped by Donald Cerrone when "Cowboy" submitted him via rear-naked choke in the first round at UFC 137.

Prior to the loss, Siver had picked up wins over Spencer Fisher, Andre Winner, George Sotiropoulos and Matt Wiman.