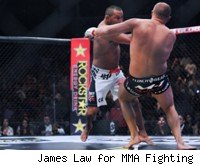 HOFFMAN ESTATES, Ill. -- The unthinkable has happened in mixed martial arts: Fedor Emelianenko has lost three in a row.

Fedor, once widely recognized as the best fighter MMA had ever seen, was beaten by Dan Henderson at Saturday night's Strikeforce event, with Henderson coming from behind in dramatic fashion: Henderson appeared to be in trouble on the ground, and then an instant later he pulled free and hit Fedor right in the chin from behind. Fedor went limp and fell face-first to the canvas, and referee Herb Dean stepped in to stop the fight.

The whole fight was 4 minutes, 12 seconds of wild action.

Fedor quickly recovered from the punch that knocked him down and appeared to be defending himself when Dean stepped in, and after the fight he said he thought the stoppage was early. But replays showed that Fedor seemed to be out for a moment before coming to, and that made it the correct call for Dean to end the fight.

Henderson was elated with one of the biggest wins of his career.

"I've been a huge fan of Fedor's forever," Henderson said. "I respect him so much as a fighter, what he's done for the sport. For me, that's a huge accomplishment. ... As a fan of Fedor's, I hope he keeps fighting."

The fight started off at a thrilling pace, with both men landing hard punches in the first few seconds. Henderson had Fedor hurt early, and Fedor clinched to take a breather, which slowed down the pace of the fight. Henderson controlled Fedor against the cage for about two full minutes before they finally separated, and then it was crazy back-and-forth action the rest of the way.

Fedor landed one of his trademark looping punches to Henderson's head, seeming to hurt Henderson, and Fedor got on top of Henderson on the ground and hit him a couple of times. But Henderson brilliantly saw his opening and took it, and he ended the fight in dramatic fashion.

Editor markup for Fedor vs. Henderson Photos. This is only visible in the story editor.

He may also have ended Fedor's career: No one ever could have envisioned that Fedor would have lost three in a row, and the questions about his retirement will now only heat up. All Fedor would say after the fight to those questions was that any decisions about his future are in God's hands.

On Saturday night, it was Henderson whose hands finished Fedor in a great round of action.