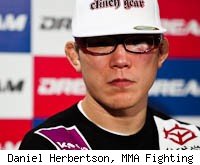 Few will be able to see it, but DREAM returns from an almost six-month hiatus on Sunday with it's "Fight for Japan" charity event at the Saitama Super Arena in Japan.

With Japan recovering from the March 11 earthquake and DREAM having financial issues, the event will take place in front of only 7,000 spectators, will be on a two-day tape-delayed PPV in Japan and will be broadcast on a five-day tape delay in North America on HDNet.

After the break, predictions for the first major Japanese MMA event of 2011 featuring DREAM lightweight champion Shinya Aoki taking on longtime UFC veteran Rich Clementi and the opening rounds of the bantamweight tournament.

What: DREAM "Fight for Japan"

Clementi has slipped somewhat in recent years, going 7-7 since his last win in the UFC in May 2008 with back-to-back losses to Gray Maynard and Gleison Tibau seeing the 60-fight veteran lose his UFC contract.

The memory of Aoki's humiliating loss to Yuichiro "Jienotsu" Nagashima was somewhat erased with his impressive domination of Lyle Beerbohm in Strikeforce and the submission specialist should put on a similar performance here against Clementi. The 12 days notice for the American won't help his cause. A first-round rear-naked choke seems likely.
Pick: Aoki

Joachim Hansen vs. Mitsuhiro Ishida
Longtime lightweight veterans of the Japanese circuit, Joachim Hansen and Mitsuhiro Ishida both dropped to featherweight in 2010 but they have had varying results: Hansen has fought a much higher quality of fighter, going 2-2 but Ishida has been flawless with two tireless decision wins.

The real difference is in how easily the former lightweights have cut the ten pounds. Ishida has not missed a step at featherweight and as always, has had a bottomless gas tank. Hansen on the other hand has had be drawn out, running low on cardio and suffered the first KO loss of his career against current champ Hiroyuki Takaya.

I'm still not convinced that Hansen is able to fight at 100 percent at a featherweight and Ishida will test his gas tank to the limit. The former DREAM lightweight champion drops a close and entertaining decision to Ishida.
Pick: Ishida

"Lion" Takeshi Inoue vs. Koichiro Matsumoto
The former Shooto champion "Lion" Takeshi and reigning Deep featherweight champion Koichiro Matsumoto are similar fighters, both being rangy strikers with heavy hands supported by excellent low kicks, but Lion is the better and more experienced fighter of the two. This superb bit of matchmaking should lead to an interesting fight, but Lion's experience should get him across the line. Look for multiple knockdowns and a dramatic comeback in classic "Lion" style.
Pick: Inoue

Caol Uno vs. "Wicky" Akiyo Nishiura
One of the legends of the Japanese MMA scene, Caol Uno, is on the verge of retiring and given his record over the past few years, it may not be a bad thing. The former Shooto ace and long-time UFC veteran has gone 1-4-1 in his last six outings as a lightweight (although two decisions during his recent UFC run were questioned by some), and his drop to featherweight was spoiled in humiliating fashion by the chain suplexes of Kazuyuki Miyata.

Unfortunately for Uno, he is just the kind of opponent that "Wicky" Akiyo enjoys. The hard hitting "Lion" Takeshi teammate has had problem with wrestlers (although Matt Hume has been correcting this issue for the past year) but seems to be unsubmittable and as his dramatic knockout of Hideo Tokoro showed, he has incredible one punch power.

Uno may be able to avoid the hands of Wicky for at least one round but he doesn't have the strength and wrestling ability to keep the striker on his back for the full duration of the bout. Uno gets caught with a crushing uppercut and I have a feeling we may see him retire post-fight.
Pick: Nishiura

Kikuno's remarkable strength and trademark crescent kick should lead to a knockout victory but Nakamura's low kicks, jabs and movement on the feet and chain submissions on the mat will make it interesting.
Pick: Kikuno

Fujiwara has knockout power in his hands and is difficult to submit while Imanari has incredible submissions and is difficult to knockout as he flops to his back whenever pressed too hard on the feet. The potential for a snoozer is high here and a decision seems likely. It's Imanari's fight to lose but Fujiwara does have the upset in him.
Pick: Imanari

The Hiroyuki Abe student started his career with two losses but recovered to build an unremarkable record of 11-7- 1. Of the five losses that have come since his initial rough start though, four of those were very controversial decisions and he would most likely be in the UFC right now if the coin had have been flipped in his favor. This fortune is a product of his style: an athletic and strong wrestler, Otsuka has next to no finishing ability.

WEC veteran Kenji Osawa has a similar style but Otsuka is better in every aspect of the game. It's bound to be a long, back and forth positional battle but Otsuka takes the decision.
Pick: Otsuka

Hideo Tokoro vs. Yoshiro Maeda
Tokoro and Maeda are unusual fighters in that they are supremely talented but their records and careers show a different story.

Tokoro's penchant for entertainment and submission over safety and position has led to him winning only just over half of his bouts in his 51-fight career while Maeda has the ability to push anyone to the limit, as his incredible WEC title match with Miguel Torres showed, but sometimes he just implodes and loses in truely dramatic fashion.

It's very difficult to predict an outcome in this excellent bit of match making but Maeda is more consistent (I never, ever thought I would say that) and he has much more power on the feet. A potential fight of the night candidate that Maeda takes by TKO.
Pick: Maeda

Yusaku Nakamura vs. Atsushi Yamamoto
Late replacement Yusaku Nakamura won't be known by the vast majority of fans, only fighting three professional bouts on regional events and Norifumi "KID" Yamamoto student Atsuhi Yamamoto has been away from the ring for almost one and half years.

Nakamura has rare power for a bantamweight, possessing legitimate one-punch power in his hands but he is still too raw for a tournament of this level. Yamamoto's wrestling and boxing logically leads him to take a dominant decision but for some reason I wouldn't be surprised if Nakamura scores a surprise knockout.
Pick: Yamamoto

Bantamweight Grand Prix Semifinals:
If my predictions prove to be correct, we should have Imanari vs. Otsuka and Maeda vs. Yamamoto for our semifinals.

Masakazu Imanari actually lost his last fight, a decision to Hiroshi "Iron" Nakamura. Nakamura is a physically strong wrestler who is difficult to submit and wont go away and Takafumi Otsuka's wrestling is better than Nakamura's and he is slicker on the feet. Otsuka takes another decision as long as his mind is solid, his history of losing focus late in a bout is troubling against ruthless submission artist like Imanari.

As always it is impossible to predict a Maeda bout but I like Yamamoto to take a decision over Maeda. Atsushi Yamamoto has better wrestling and is solid on the feet but note hugely powerful. Although Maeda is beautiful to watch and powerful, his history of imploding worries me. Yamamoto grinds Maeda down in a tough decision.