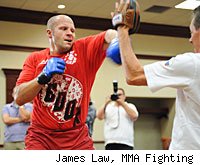 MMA Fighting has Fedor vs. Ishii results for the Dream New Year's Eve fight card at the Saitama Super Arena in Saitama, Japan.

The event, headlined by a fight between Fedor Emelianenko vs. Satoshi Ishii, is titled "Genki Desu Ka!!" and is this year's version of Dynamite!!. The 17-fight lineup will have MMA, boxing and even pro wrestling matches.

Check out the full results below.