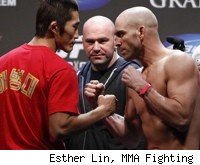 LAS VEGAS -- This is the UFC 141 live blog for all the Facebook preliminary bouts in support of tonight's UFC pay-per-view from the MGM Grand Garden Arena in Las Vegas.

Referee Yves Lavigne gives the signal and away we go. Kim peppers Pierson with leg kicks, gauging the distance early on. Pierson closes the gap and ends up in the clinch briefly. Once back in space, he opens up his striking game just a tad. Nice left hook by Pierson forces Kim back, but Kim responds with a nice punch of his own and a body kick. Left hand from Kim stings Pierson. This might be the best stand-up we've ever seen from the Korean. Kim jerks Pierson's head down in a front headlock, but can't do much with it. Pierson works around for his back and Kim executes a nice judo throw, but ultimately ends up giving up his back anyway. Unfortunately for Pierson, there isn't time to capitalize on it. MMA Fighting scores it 10-9 for Kim.

Round 2: Kim goes right back to work touching Pierson with those kicks, while Pierson tries to counter with hooks but can't quite get in close enough. The left hand connects again for Kim. Strong leg kicks by Kim. Pierson's not going to be able to take too many of those. Pierson works his way into the clinch but can't get Kim down, and so has to let him go. Jumping front kick by Kim, followed by another straight left. Pierson drops for a single-leg, but doesn't really even get close. Another jumping head kick by Kim, and this one slams home. Pierson is wobbling all over the place. Kim attacks but gets caught in the clinch and runs out of time. MMA Fighting scores it 10-9 for Kim.

Round 3: Pierson doesn't seem fully recovered as the round starts, despite his corner's best attempts to scream him back into coherence. Kim plods forward carefully and works his way in with the straight left. Takedown by Kim, and then another after Pierson works back to his feet. Kim's on top and in Pierson's guard, but he's not terribly active there. Whether that's a result of fatigue or caution, it's tough to say. Lavigne shouts at them to work, and Kim stands up in search of a pass. Lavigne gets tired of waiting for him to execute it and stands them up with a little more than a minute to go. Kim sticks and moves in the waning moments, while an exhausted Pierson moves in with slow strikes. Kim tags him with a Superman punch, and then another jumping front kick just for good measure. MMA Fighting scores it 10-9 for Kim.

Round 1: They trade leg kicks to start off and Volkmann looks to paw in with the lead right. Volkmann shoots and Escudero tries for a guillotine, but Volkmann fights it off and gets to side control. Escudero tries to recover guard and Volkmann stands up to a torrent of kicks from the bottom, but gradually works back into Escudero's half-guard. The crowd is already growing tired of Volkmann's routine. Referee Herb Dean takes a long look at the slow-paced action, but Volkmann's doing just enough to avoid a stand-up. The crowd doesn't like it, but Dean isn't inclined to bring them up just yet. Volkmann postures up and throws more when he hears the ten-second warning, but to little effect. Escudero gets up looking frustrated after the round. MMA Fighting scores it 10-9 for Volkmann.

Round 2: Volkmann wastes very little time before shooting for another takedown. Again Escudero tries the guillotine, but with Volkmann's style you have to think that's the submission he's most experienced at defending against. Less than a minute gone in the round, and Volkmann is back on that same grind. Whistles and boos from the Vegas crowd let him know it's not appreciated, but he seems unfazed. Escudero recovers guard and breaks Volkmann down. Dean has seen enough and stands them up -- a decision that gets the loudest cheers of this fight. Volkmann immediately closes the distance and looks for a takedown from the clinch, getting around behind Escudero and eventually hauling him down. Volkmann gets to side control and then takes Escudero's back, looking for the rear-naked choke. Escudero defends and Volkmann has to give it up. The round ends with Volkmann on top and the crowd growing restless. MMA Fighting scores it 10-9 for Volkmann.

Round 3: Volkmann waits all of 25 seconds before shooting for a takedown and planting Escudero on his back. A sense of bored deja vu begins to set in. Volkmann works his short punches. Escudero tries to defend. Around and around we go. Dean stands them up again, only to have Volkmann immediately shoot back in and again suffocate Escudero in the clinch. You can't say any of this is a surprise, but neither can you say that the paying audience here at the MGM Grand is enjoying it. And then, a break in the clouds. Escudero locks up a standing guillotine with a modified grip, and Volkmann is forced to drop to his back to defend. Escudero tries to turn it into a shoulder choke, then another guillotine, but Volkmann is hanging in there and maintaining his consciousness. Escudero's going to run out of time, but at least it injected some life there at the end. MMA Fighting scores it 10-9 for Escudero.

Round 1: Referee Steve Mazzagatti gives the signal and we're off. Nunes gets on his bicycle right away, circling on the outside and looking to kick. He smacks Gamburyan with a few good ones to the thigh before Gamburyan finally gets out of the way of one. Gamburyan ducks under a hook and looks for a takedown, but Nunes stuffs it. Nunes seems much quicker early on, and Gamburyan may be getting frustrated. Gamburyan catches a leg kick and looks for another takedown, but Nunes' defense is solid. He keeps after it though and puts Nunes on his back with two minutes left in the round. Nunes is back up quickly and the leg kick assault continues. Gamburyan is looking to hook when Nunes kicks, but he's not checking anything so far. Shot from Gamburyan is stuffed easily by Nunes. MMA Fighting scores it 10-9 for Nunes.

Round 2: They get into a feinting contest to start the second, then Gamburyan opens up with a big hook and goes on the attack. Nunes backs up and looks for a jumping knee, but this only earns him a chance to defend more takedowns and absorb some knees. Mazzagatti warns him about grabbing the fence to avoid a takedown, telling him, "Don't do it again." Gamburyan stays after him and eventually gets another takedown. Gamburyan's corner is screaming at Mazzagatti about Nunes using the fence to reposition himself, but Mazzagatti seems less inclined to do anything this time. Gamburyan is shouting at Mazzagatti now to "watch the fingers." It's unclear what he's talking about, and Mazzagatti looks as confused as anyone. Nunes gets to his feet and goes on the attack with punches and knees. Gamburyan defends and we end the round back in the center, with both men starting to look a little weary. MMA Fighting scores the round 10-9 for Gamburyan.

Round 3: Nunes got warning in between rounds about grabbing the fence. "Do it one more time," Mazzagatti said, and then trailed off. The implication was that he would lose a costly point in a close fight, so hopefully he picked up on that. The round starts and the two fighters exchange some words of mutual encouragement. Gamburyan scores first with a nice hook, and Nunes looks to resume his kicking attack. Gamburyan's left thigh is bright red now. That is not going to feel good in the morning, but that's what he gets for not bothering to check any of these kicks. One takedown attempt by Gamburyan is stuffed, and then another a few moments later. Nunes chops away at him with more kicks, then tosses one upside Gamburyan's head before going low again. Gamburyan holds his groin as if he's been kicked low, but Mazzagatti doesn't seem to think so. Another takedown attempt by Gamburyan fails, followed by a kick that definitely caught Gamburyan in the pills, so we'll pause for a moment. Gamburyan tries to get one last takedown after the restart, but he can't finish it before the horn. This could be close. MMA Fighting scores it 10-9 for Nunes.