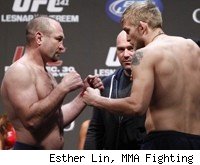 LAS VEGAS -- This is the UFC 141 live blog for Alexander Gustafsson vs. Vladimir Matyushenko, a light heavyweight bout on tonight's UFC pay-per-view from the MGM Grand Garden Arena in Las Vegas.

Round 1: Gustafsson's size and reach advantage becomes evident right away as he moves to the center and extends a long left arm to gauge the distance. Matyushenko tries to jump in with a hook, but it's a long trip. Kick by Gustafsson, and Vladdy tries to use it to take him down, but to no avail. Good front kick by Gustafsson. Vladdy comes leaping in with a left hook and Gustafsson sticks him with a jab that catches him flush and drops him. Gustafsson jumps on him as Matyushenko rolls to his stomach and covers up. Referee Yves Lavigne has seen enough, and this one is over.

Alexander Gustafsson def. Vladimir Matyushenko via TKO (punches) at 2:13 of round one