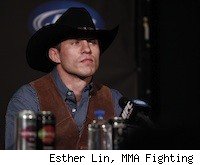 LAS VEGAS -- No matter what happens at UFC 141, it's been a good year for Donald Cerrone. He debuted in the UFC, racked up four wins in four fights, and pocketed more than $200,000 in post-fight bonuses alone. For a guy who was scraping by on WEC wages this time last year, that's good money.

"And it's gone," Cerrone told reporters with a Dennis the Menace grin earlier this week, explaining, "I now own everything I ever wanted."

In case you haven't noticed by now, Cerrone's the kind of guy who marches to the beat of his own drummer. It's not necessarily that he isn't thinking about tomorrow so much as he is committed to getting the most out of today. While a lot of guys might have put all that bonus money toward retirement, Cerrone had other plans for it.

"I bought my sister a brand new Hummer for Christmas," he said. "It felt good, but now I'm broke. Thanks, sis."

Fortunately for him, he has another chance to get paid on Friday night, and Nate Diaz seems like just the kind of willing dance partner he needs for another Fight of the Night performance.

But aside from just the paycheck, there's a lot on the line for the 28-year-old "Cowboy." A win over Diaz would give him five straight in the UFC -- seven in a row under the Zuffa banner. Even in the crowded lightweight division, that would have to put him somewhere in the vicinity of a title shot, wouldn't it?

"That's been the question," Cerrone said. "And my answer to that is, I don't care."

His goals are more immediate than that, not surprisingly. Aside from a victory on Friday, what he really wants is a chance to fight on the UFC's February card in Japan, he said. In fact, a title shot might be more than he can handle right now, he suggested, since he's only recently found his psychological comfort zone.

"Am I mentally ready to hold that belt?" Cerrone said. "You've got to be an upstanding citizen to be the champion. I don't know if I'm ready to make those sacrifices yet. We'll see."

At least he's got the honest self-reflection part down. Maybe if he can calm down just a little -- and resist the siren's song of recreational bull-riding -- Cerrone's ride could be just beginning.