Eight Ways of Looking at UFC 141 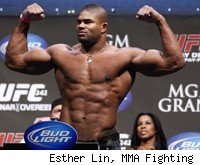 We're just a few hours away from UFC 141, and questions and concerns abound for the final event of a busy year. Here, in no particular order, are just a few of them.

I. Brock Lesnar vs. Alistair Overeem: the fight that divides friends and colleagues, even in (especially in?) the MMA media. I went out for cocktails on the Las Vegas strip last night with some fellow reporters, and it didn't take long for the conversation to get around to main event predictions. Normally these are polite conversations. We've all done this a few times by now, and it's not like we have a personal stake in it aside from simply wanting to be right. But this time was different. Passionate arguments were made. Outside voices were used inside. Tempers flared. What is it about this fight that gets people so fired up? For starters, I think it's the unpredictability. As I touched on in my Sports Illustrated column this week, there are so many hazy variables in this fight -- physically and psychologically -- that attempting to form a reasoned analysis requires you to pretend to know some things you can't possibly know. Has Overeem put the work in to improve his wrestling? Is the post-surgery, post-layoff Lesnar as good as the Lesnar who still had an intact colon? We can't know these things. Not until they get in the cage and sort it out. But perhaps because that provides such fertile ground for arguments, we could easily get carried away if we let ourselves -- and we often do. Thankfully, the time for talking is almost done.

II. But regardless of who you're picking, you have to admit that we still don't know as much about Alistair Overeem as we think we do. Or rather, we don't know as much as we should, given how many fights he's had. That's because, as my colleague Mike Chiappetta pointed out in a thought-provoking piece this week, Overeem's recent past has featured some very forgettable opponents. Nothing against Tony Sylvester or James Thompson, but they aren't exactly the cream of the heavyweight crop. Lesnar has far fewer fights, but his record isn't nearly as padded as Overeem's is. That's not to say the hype around the big Dutchman is unfounded. Clearly, this man can fight. But it's one thing to knock people out in K-1, where you don't even have to think about takedowns, and quite another to open up and throw against a guy who you know is thinking double-leg. Maybe Overeem really is as good as he looks on paper. But until we see him against some of these UFC heavyweights, we don't really know for sure.

III. Out with the bearded, contemplative Lesnar, and in with the meathead bully straight out of a comic book. Not to put too much stock into a man's appearance before a fight of this magnitude, but remember when Lesnar showed up to fight Cain Velasquez with that magnificent beard on his face? He was quieter, gentler -- almost philosophic. Then he got his tail kicked, so now he seems to have gone back to his roots with the high and tight crew-cut that's a lock to get him voted 'Most Likely to Shove You into a Locker.' He's also ditched that pensive demeanor, too. He's done the bare minimum in terms of media responsibilities this week, and he's barely tried to hide his contempt for them in the process. He told us at the presser that he'd been "street-fighting" since he was eight years old, and remarked that that's about all there was to do in South Dakota, aside from "stealing other guys' girlfriends." Honestly, it's like he stepped straight out of an after-school special. At least in the scripted version, guys like that never win in the end. Real life is usually a bit more of a toss-up.

IV. When it comes to Donald Cerrone and Nate Diaz, who's in whose head? You can't quite call what's been going on with these two 'mind games.' Let's face it, getting in a guy's face and calling him a punk-ass (individual) isn't exactly brilliant psychological gamesmanship. Still, it works for them. Or at least for one of them. We know Diaz only has one setting, and Cerrone found it at the press conference. The question is, does Cerrone see this as a tactic, or is he taking all the pre-fight extracurriculars as seriously as Diaz? And even if he is trying to manipulate Diaz, can he do so without falling into his own trap once the trash-talk and the middle fingers fly? He claims to be wondering the same thing himself, but we already know that Diaz is comfortable fighting on pure emotion. We have yet to see how well it will work for Cerrone.

V. Jon Fitch and the MMA masses may never see eye-to-eye, and that's okay. He says fans want too much pro wrestling in their pro fighting, and he might have a point. The pre-fight trash talk? The rivalries, both real and imagined? The larger-than-life personas? MMA fans love that stuff -- far more than they love takedowns and top control. But so what? Does Fitch really think he can talk them out of it and convince them that he's actually fun to watch? People know what they like, and the bulk of MMA fans do not like seeing Fitch grind out decision after decision. Maybe that's a sign of our own failings as a culture, but it's also reality. If Fitch isn't going to give fans what they want to see, he might as well resign himself to being the guy who plays to quiet, anesthetized crowds. That's not the worst thing that can happen. Not if you're still winning.

VI. The future and the past clash in the light heavyweight division. At 41, Vladimir Matyushenko is as grizzled a vet as you can find in the UFC. And at 24, Alexander Gustafsson probably still gets carded at Vegas nightclubs. It's almost fitting that they should meet at this year-end show as we wave goodbye to one year and step into the next one, but the stakes are not equal for both men. If Matyushenko hopes to do more than just hang around for a little while longer in the UFC, this is the fight he needs to win. If Gustafsson is going to fulfill the potential that his coaches and training partners see in him, a savvy, experienced opponent like Vladdy is perhaps the perfect test. It's not a fight that will sell many tickets on its own, but it is a bit of matchmaking genius from Joe Silva. One way or another, we're going to get some questions answered on Friday night.

VII. If you looked closely at Thursday's weigh-ins, you might have noticed Jacob Volkmann handing a little care package to Efrain Escudero before he weighed in. Escudero smiled politely, but his coach didn't seem to think it was so funny as he took it and flung it off the stage. So what was it? According to an MGM Grand usher who I convinced to go take a closer look, it was a first-aid kit. Too bad Volkmann's attempt at humor -- or maybe the lynchpin of his presidential health care plan -- ended up getting left behind in the MGM Grand Garden Arena.

VIII. So how much will the Friday night, pre-New Year's Eve date really hurt the UFC? My guess is, not much. It's still Lesnar-Overeem. It's still a huge fight. And even though the UFC got a late start promoting it, it's become enough of a story (complete with clever viral video efforts) that the pay-per-view buying public knows when the fight is. It's the casual viewers -- the bar-goers and friends of friends -- who may not have gotten the message. Once they hear the chatter on Twitter and via text message, there will probably still be plenty of time for them to get in on the action. There's one instance where the later start helps, even if it's not doing those poor East Coasters any favors to make them wait until 10 p.m. for the fights to start.