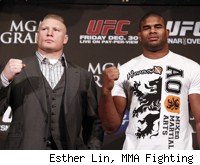 In analyzing a matchup, you look at past history as a projection tool for future performance. But what does the recent past mean for either Brock Lesnar or Alistair Overeem?

Lesnar hasn't fought in over a year, time spent mostly recovering from a serious recurrence of diverticulitis that necessitated removal of a diseased 12-inch section of his colon. Life's also been fairly rocky for Overeem, who split with his longtime team Golden Glory, was temporarily released from his Zuffa contract, and most recently returned home to help his mother battle through cancer. His last time out in the cage wasn't exactly telling, either. He fought just once in 2011, a bout which he won by decision against Fabricio Werdum that is mostly remembered for lengthy stretches of inactivity.

Suffice it to say, neither fighter comes into the UFC 141 main event with major momentum.

Complicating the matter of predicting this fight is question marks in each man's game.

For Overeem, it's his defensive wrestling. We all know that Lesnar will go for the takedown at the first available opportunity. Will Overeem be capable of stopping him? According to FightMetric, Overeem stops 76 percent of takedown tries.

That's a great number, but when you look at who he's fought, how many real wrestling threats he has had to shut down? He really hasn't faced a prime functional MMA wrestler since 2003, when he lost to Chuck Liddell. At the time, Overeem was 23 years old and practically a stick figure compared to his current appearance.

Since then, the only fighter he's faced with a strong wrestling background was Kaz Fujita, who was 39 years old at the time and came into the match losing four of six. Only two of his last 10 opponents have managed to put Overeem on his back: Fabricio Werdum and Mark Hunt.

Lesnar has better wrestling credentials than any of those recent foes, and he's also bigger and stronger than them.

On the other hand, it's certainly fair to wonder how Lesnar will respond to Overeem's vaunted striking game. Lesnar had big trouble against each of his last two foes, Cain Velasquez and Shane Carwin when it came to standup. A former K-1 World Grand Prix champion, Overeem is far more accomplished than either of those men, and he's KO'd three of his last four MMA opponents.

Overeem is also known for his powerful knees, a technique that can be a major deterrent for a wrestler looking to go at the legs for a takedown.

Lesnar once pointed out how he had a head "like a ball-peen hammer," but in each of his last two fights, he's taken a lot of punches in a short amount of time, and didn't look like he much enjoyed it. If he had spent a significant amount of time over the last few months further adjusting to standup, we might expect him to look more comfortable as he tries to close the distance, but since he was simply in a bed recovering for a lot of that time, it's unlikely to expect much change in that regard.

And so this fight will be like an old-school MMA bout, the wrestler knowing he can only win by taking it to the ground, and the striker needing to stay on his feet.

Which is more likely to happen?

I expect this one to get off to a slow start as Lesnar decides upon the timing of an approach and Overeem comes out ready to defend the first shot. A lot of the fight's outcome will depend on their first engagement.

If Lesnar quickly takes Overeem down, he gets the early momentum. And let's face it, most of Lesnar's opponents have not been able to get back up when he's gotten them to the mat. He has great positioning and can inflict some damage from the top.

But Cain Velasquez showed it is possible to get back to your feet against him. Of course, Velasquez, like Lesnar, has a decorated wrestling background, so he's quite familiar with working his way up from that position.

Overeem doesn't have that in his background, and as previously mentioned, he hasn't recently faced wrestlers, so we don't really know if he'll wilt under there or be able to use his athleticism to get back up. Overeem also hasn't let reporters in on his pre-fight training, so we don't know how much exposure he had to top level wrestlers.

Since he had more than three months to prepare and spent some time at Xtreme Couture, we have to assume that it was a focus of his camp. And while it's not enough to completely cancel out Lesnar's experience edge there, it might enough to keep him upright long enough to hurt the former UFC champion.

UFC president Dana White likes to point out that "styles make fights," and that's exactly what's riveting about this one. Generally speaking, a good wrestler beats a good striker 75 percent of the time because he can control position, but heavyweights bring so much power to the table that one strike can change the outcome in a flash.

Overeem's récent troubles are enough to keep a man unfocused, but Lesnar wasn't even working out for most of 2011, and that seems far more problematic. His surgery was seven months ago, and he only began training again in September. That may have provided him enough time to return to normal physically, but it didn't allow him any time to expand his arsenal or even shake off ring rust.

Overeem has been more active and doesn't have any lingering doubt about his body betraying him. If Lesnar still has doubts about his own health, we'll see them. Overeem may only need to stop one takedown to turn the tide for good. I'm betting he's able to stay upright long enough to win. Overeem in a second-round TKO.