UFC 141 Blog: Donald Cerrone on Getting Snubbed by Nate Diaz 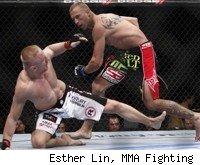 A couple of months ago at UFC 137, at the open workout at the TUF Gym in Vegas, Nate Diaz was in the room talking to my best friend, Leonard Garcia, so I went over to shake his hand. Nothing major just like, "Hey man, what's going on? Nice to meet you."

This was the first time I've ever met the dude and I was being polite. Y'know, because that what you do when you are in a room and your friend is talking to a dude right in front of you, you introduce yourself.

But Diaz slapped my hand away and called me a 'punk-ass b**ch' and walked off.

This guy thinks you've got to be dumb or come from Stockton, wherever that is, to be tough. But I've got the same 'I don't give a f**k' gene he has, and I also got genes for better striking and better wrestling. He pissed me off, he lit my fire up and as soon as I beat Dennis Siver at UFC 137 I knew that I wanted to fight again before the end of the year, and I knew I wanted to fight Nate Diaz.

The weird thing is, I like the Diaz brothers. They come to fight. They are crazy. They bring it. Diaz is going to show up Friday night at UFC 141 and we will have a war. Do I respect him as a fighter? Yes I do. He comes to throw down. He comes and fights with everything he's got. Is that enough to stop me from beating him up? No, it is not. Not anywhere near.

If he wants to stand, let's stand. He won't last a round with that funny hands above his head like he's riding a Harley stance. And if he wants to take me down, first he has got to beat my wrestling, and he isn't good enough to do that. And I don't know if it is a good idea for him to even try to take me down. My BJJ isn't great, but it is as good as his.

Diaz doesn't make a whole lot of sense when he talks. He said if I don't knock him out or win a decision, I am in trouble. What does that mean? I know how to co-exist in this world, and part of that is to say 'Hi' and shake hands with people. Diaz can't do that. I guess he didn't go to school to learn how to shake hands... sorry, inside joke.

Yesterday we had the open workouts at the same TUF gym where Diaz slapped my hand away in October. I was in the locker room waiting for him to get done doing interviews with press, but then I decided to go out and give him something to worry about. I purposely went out there knowing he wasn't done and started hitting pads. He kept turning around real skittish.

I got this. If he makes it to the second round, he's had a lucky night.