How Will Fans Respond to a Friday Night UFC Event? Even Dana White Wonders 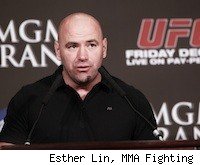 LAS VEGAS -- The MMA world is so used to Saturday night pay-per-view events that even UFC president Dana White was bound to slip up when promoting the rare Friday night outing this week. Unfortunately, he made the mistake when talking with the people at the UFC's new wireless partner, MetroPCS.

It's so easy to do. The UFC has gotten its fight week routine down to such a consistent rhythm, fans and media alike are conditioned to expect things in a certain order. Press conference on Thursday, weigh-ins on Friday, fights on Saturday. Only the names and locations change -- until this time. But in order to avoid the colossal headache of trying to promote a fight on New Year's Eve in Las Vegas, the UFC had to move everything up a day this week. Now even White isn't sure how fans will react.

And, in theory, the UFC could have slated UFC 141 for Saturday night. After all, big fights on New Year's Eve are a tradition in Japan, but then so is staying home to watch TV that night. The UFC could have tried to convince fans to order a pay-per-view rather than go out and party, but then, that wouldn't have been the only gamble, White pointed out.

"The problem is, you can't put on fights in Las Vegas on [New Year's Eve]," he said. "They shut the strip down. You can't even get around here. It would be a nightmare."

At one point, the UFC president was "almost 100 percent confident" that the organization was headed back to Abu Dhabi for a New Year's Eve show, he said. And yet here we are again, back in the UFC's hometown, with White hoping that fans won't wake up on Saturday morning eagerly anticipating some big fights that they already missed.

It's one variable of many that makes it hard to predict this event's chances for success. With UFC 141, the organization is returning to the 10 p.m. ET start time that it had previously abandoned in favor of moving the action up an hour. The UFC also turned to its new friends at FUEL TV -- a FOX cable channel that is available in about 60 million fewer homes than the UFC's former TV partners at Spike -- to help promote the event with the customary "Countdown" show.

Ratings were dismal for that effort, with a measly 15,000 viewers for its Dec. 21 premiere, according to MMA Junkie. But White, of course, claimed that this was more or less what he expected so early in the game.

"It wasn't alarming at all," he told reporters. "Those are the type of ratings that that network pulls. ...Those numbers will build. We're going to build that network."

Part of the problem is availability. Fight fans know where Spike TV is on the dial, and most of them probably have it in their cable packages. The same can't be said of FUEL, though White seems to be hoping that fans will pipe up once the UFC takes its act there full-time in 2012.

"I think that once all this programming goes out on FUEL, I think the fans are going to end up [requesting it from cable operators]," he said. "More and more people are going to want FUEL."

That's fine for next year, but what about Friday night? The UFC is offering up one of its biggest pay-per-view draws in Brock Lesnar, not to mention a simmering feud between Donald Cerrone and Nate Diaz, and it risks waving goodbye to a healthy chunk of pay-per-view revenue if it can't get the word out and convince fans to find a seat on the couch by Friday night.

It might not be quite as difficult as putting on a fight in Vegas on New Year's Eve would have been, but it's no small challenge, either. When even the president of the company occasionally flubs the night of the show while selling it out in public, you know there are potential problems on the horizon. Once you have to deviate from your own dependable schedule, there are bound to be some people who don't get the message in time.