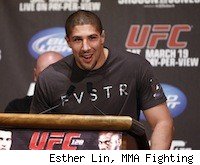 After suffering a knockout loss in his biggest career bout, Brendan Schaub will attempt to bounce back when he faces Ben Rothwell at UFC 145 in March 2012.

The UFC confirmed that both heavyweights have verbally agreed to the bout, which will take place during an event at the Bell Centre in Montreal.

Schaub recently saw his four-fight win streak snapped in a first-round knockout loss to Antonio Rodrigo Nogueira at UFC 134 in Rio de Janeiro. The 6-foot-4 Coloradoan looked good in the early going before getting ciipped, and Nogueira finished him with ground strikes for only his third career KO in over 40 fights.

Prior to that, Schaub (8-2) had put together a nice run, capped by a third-round knockout of Mirko "Cro Cop" Filipovic that vaulted him into contender status.

Rothwell too will be looking to rebound from a loss. Following a long layoff due to a knee injury and subsequent surgery, Rothwell (31-8) returned at September's UFC 135 and lost a decision to Mark Hunt.

The UFC has yet to officially announce a main event for UFC 145, but other bouts include Rory MacDonald vs. Che Mills and Travis Browne vs. Chad Griggs. The Bell Centre has been one of the most profitable venues for the promotion in recent years, with the arena briefly holding the North American attendance record, a mark that was later shattered by Toronto's cavernous Rogers Centre.