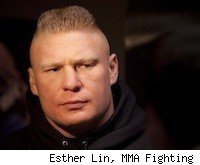 For UFC 141, the Vegas-based promotion is back home in the arms of the city that's never more than one good heater away from turning this mess around. Will Friday night be the evening you finally outsmart the oddsmakers and let your obsessive MMA knowledge pay you back for all those pay-per-views? Only one way to find out...

The line on Overeem has gone as high as -200 in some places before coming back down to the more reasonable levels we see here. We all know how Lesnar feels about being the underdog. Or at least, we know that asking him how he feels about it is a great way to get him to suddenly terminate your interview. But why are fans and oddsmakers so hot on Overeem, who didn't look spectacular in his last outing, and has had every distraction possible without beginning an acting career in the lead-up to this fight?

If I had to guess, I'd say it's a combination of Overeem's experience and a general pessimism about Lesnar. A little over a year ago he was the baddest man on the planet to many onlookers, but one loss and one colon-chopping surgery later and people are wondering if he'll retire if he can't beat Overeem. For better or worse, the pendulum swings hard on the subject of Lesnar, and there's very little middle ground to be found. But the fact is, the former NCAA wrestling champ presents a difficult challenge for Overeem, who hasn't faced a takedown threat this significant since, well, ever. Seriously, look at Overeem's record and find me another big man with Lesnar's wrestling skills. It's one thing to shut down Fabricio Werdum's takedowns, but Lesnar is a whole different problem. If Overeem had spent months working diligently on his takedown defense -- in fact, if he had spent months doing any one thing in any one place -- I'd be more optimistic. With all the distractions, the roving camp, and the possibility of Octagon jitters for a man with an unproven ability to shut down a powerhouse wrestler, optimism is in short supply over here.
My pick: Lesnar. There's always the possibility that one good punch or knee from The Reem will change his world, but when I add up all the variables I have no problem justifying the slight underdog pick.

This feels like an instance of oddsmakers getting the right guy, but to the wrong degree. Cerrone deserves to be the favorite, especially after the year he's had, but Diaz's tenacity, durability, and submissions game make him impossible to count out. Even if Cerrone batters Diaz bloody on the feet -- and he very well may -- he's probably going to have to keep it up for three rounds. Diaz doesn't go down easily, and his sheer pace and pressure has been known to make opponents do dumb things from time to time. At the same time, Diaz doesn't seem capable of performing the kind of risk/reward calculus necessary to conclude that he needs to get the fight to the mat. If you're beating him on the feet, chances are it will only make him more committed to fighting on the feet. If that's the case, his best hope might be to keep the heat on and trash-talk Cerrone into a stupid mistake.
My pick: Cerrone. I couldn't possibly justify favoring him to this extreme, so I'll save it for the parlay.

Oh, did you forget Fitch was on this card? You're probably not alone. It's easy to get dwarfed by the enormity of Lesnar and Overeem, and the Cerrone-Diaz fight promises exactly the kind of fireworks that a typical Fitch fight all but rules out. As a result, he flies under the radar in another fight that he'll most likely win with his methodical, technical brilliance on the mat. You have to hand it to him: the man is outstanding at what he does. It's just too bad that so many fans don't enjoy what he does, no matter how well he does it. Hendricks would seem to have the pure wresting credentials to strap on the singlet and go takedown for takedown with Fitch, but he doesn't quite have the high-level experience to make you feel comfortable with picking him over a vet like Fitch.
My pick: Fitch. It won't be much fun to watch, but it will be in my parlay.

It's kind of amazing that the 41-year-old Matyushenko still has this much steam. He's not in the title hunt at the moment, but when you look at the loss column of his record all you see are serious players (okay, and Vernon White, who Vladdy will still tell you he should have beaten that night in 1999). Still, the odds reflect a general feeling that Gustafsson is on his way up the ranks, whereas Matyushenko is doing well just to hang around where he is. Could Matyushenko outwrestle the big Swede? Sure he could. But just because Phil Davis managed to do it, that doesn't mean it's easy.
My pick: Gustafsson. That line is slightly ridiculous, however, so I'll add it to the parlay.

Have other people been seeing a different Nam Phan than I have lately? Because the guy I've seen is competent and fairly well-rounded, but he's the not the type of guy I'd lay 2-1 odds for when he's fighting a submissions wiz who has yet to find out what defeat tastes like. Granted, we don't know if Hettes' chokes are as easily applied to the upper echelon guys, but while Phan's fought the bigger names, he didn't always do so well against them. It's not so hard to imagine him being taken down and submitted, just like it's not so hard to imagine me talking myself into taking one of the safer underdogs on the card just so I don't feel like a wuss for going with so many favorites.
My pick: Hettes. There's a chance Phan could prove himself worthy of those odds, but I don't think he's done it yet.

- Matt Riddle (-130) over Luis Ramos (even). Riddle knows he needs a win, so look for him to play it smart and get it by any means necessary.

The 'For Entertainment Purposes Only' Parlay: You know what? Forget my weak list of favorites and very slight underdogs. If you've got guts and a little pocket change, I recommend taking a look at this totally insane parlay that our friends at Middle Easy have stumbled upon. It's a longshot that could make for a very happy New Year.