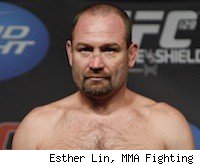 There comes a time for professional athletes when they start to get asked about how much longer they will continue competing. It's different for everyone. It might be brought on by a lack of success or injury or age. And usually when the question comes, it never lets up, until reaching the point where not a single interview goes by without being asked about the possibility of retirement.

That's about the stage that's been reached by Vladimir Matyushenko, the veteran UFC light-heavyweight who will turn 41 years old just five days after his UFC 141 bout with fast-rising prospect Alexander Gustafsson.

It's a question Matyushenko has every intention of deflecting as long as possible. And why shouldn't he? The UFC light-heavyweight has won five of his last six fights, including two in a row by knockout. His most recent, a 20-second KO of Jason Brilz in April, was the second-fastest finish of his 14-year career.

But his age combined with his resume and win streak put him in a unique situation. Is he a contender, a gatekeeper or somewhere in between?

The Friday night bout with Gustafsson is at least a step forward in determining the answer to that question. Matyushenko (26-5) himself won't discuss his place in the UFC without a bit of prodding. Focused solely on what's directly in front of him, he knows it's not quite worth the energy to think about any extraneous minutiae. But if you ask more than once, he does admit he still harbors championship dreams.

"Yes, I definitely do," he told MMA Fighting. Then he adds, "It's always in the back of my head."

He says that as if to point out that he's not overlooking the task in front of him, but that goes without saying for one of MMA's true pros. So focused was he on UFC 141 that the holiday season ceased to exist for him. For Matyushenko, there was no shopping, no binging and no problems. He didn't even buy his wife a gift.

Indeed, all of his attention has been on Gustafsson, who at 24 years old, is just four years older than Matyushenko's son Roman. Aside from one blip on his record in a submission loss to Phil Davis, Gustafsson (12-1) has impressed many with his rapidly maturing game. All four of his UFC wins have been by finish, and he's only been to a decision once in his career. In his last bout, Gustafsson thrashed Matt Hamill, sending him into retirement following a second-round TKO.

Count Matyushenko among those who have been impressed by the Swede's recent tear. Matyushenko described him as tall, young and athletic.

Of course, Matyushenko already had the real Jon Jones experience in a fight that led to the most lopsided loss of his career. Jones won by TKO in just 1:52 of the first round. So why will this time around be different?

He said that he's learned to adapt with the changing nature of MMA. He pointed to fighters like Jones, Anderson Silva, and Junior dos Santos who emphasize technique over brawling but still fight in exciting fashion. Attempting to reinvent and refine the "Janitor" has helped keep things fresh.

"The best fighters are not just bulky, strong guys," he said. "They're fast and athletic. You have to train, to move. You can't stand in front of people like that. Everything is changing and I'm changing with it. I'm getting prepared for that. I'm not in the gym fooling around. But that's the learning process. That's what actually keeps me going. I don't like doing the same thing over and over. I like change."

Matyushenko is well accustomed to changing scenery. In a career that began in 1997, he's competed in multiple promotions and under various rule sets that predated modern MMA. When he began his career, he wore wrestling shoes in the cage. At various times, he fought a 25-minute round, went the distance with Tito Ortiz in a five-round decision loss when Ortiz was the long-reigning champ, and later captured the IFL light-heavyweight championship.

Despite a solid and consistent career, he never quite earned the accolades or name recognition enjoyed by some other 40-something MMA stars that have come before him like Randy Couture and Dan Henderson -- names that Matyushenko mentions when discussing his own longevity.

That is at least partly because a major belt has eluded him. Despite all the accomplishments on his resume, that omission is one that he hopes to rectify. Even nearing 41, he believes he still has the time to do it.

"One fight at a time, but my goal is to kick some ass," he said. "Right now, my goals are simple: to make weight and go fight.

"My weight division is pretty stacked," he continued. "There are a lot of guys doing well. I'm not kidding myself saying I'm going to be champion next month. If it's going to happen, it's a long way to go, but it's possible. Anything is possible."

Funny thing about Matyushenko: when he got his "Janitor" nickname, it was back when he was a teenager wrestling internationally, and he beat Olympic gold medalist Kevin Jackson. Just beforehand, Matyushenko had been cleaning the mats, and a U.S. team member told Jackson he'd gotten beat by the janitor.

So there are two constants in Matyushenko's career going forward. One is the retirement question that doesn't seem likely to disappear even if he continues making younger fighters wilt under his pressure. And the second is being underestimated. From teen upstart to respected veteran, he's done nothing but excelled.