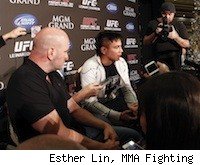 LAS VEGAS -- Miguel Torres has paid his price, served his penance, and his sins are now forgiven. Just 20 days after being fired from the UFC for an offensive tweet, UFC president Dana White appeared alongside Torres following Wednesday's UFC 141 pre-fight press conference to announce that the former WEC bantamweight champ is officially back in the organization.

"I was on vacation the last ten days, and his manager texted me and asked if they could come meet with me today," White told reporters. "So I said yes -- none of this was planned or anything -- I said yes, and he came in this morning and sat me down and basically said, since the incident happened, he's gone and reached out to every rape crisis center in Chicago and met with the people who run it and sat down and talked to them. He's donated money to all the rape crisis centers. He's been taking rape sensitivity classes, etcetera, etcetera."

A soft-spoken Torres said he visited five different rape crisis centers in the Chicago area, donating money and talking with the people there about the power his words have, even in an off-hand attempt at humor on Twitter, he said.

"I got educated, basically," said Torres. "I got put to school."


White said that Torres undertook that endeavor entirely on his own, and with no prompting or promises from the UFC.

Torres again apologized to the people he'd offended with his tweet about a "rape van," and thanked the supporters who stood behind him. As for what he would have done had the UFC not taken him back, he said, there was no back-up plan.

"When I got cut, it showed me that what I say on Twitter, what I say on social media is very powerful. I took a lot of heat for what I said. I manned up and I took it on the chin. I realized that words are very powerful, and I'm very sorry. I know what I say can hurt people."

If anyone could sympathize with a man tormented by the swift retribution for controversial public remarks, it's White. He made repeated reference to a video blog he put out in 2009 where he used homosexual epithets to describe anonymous sources in an article by reporter Loretta Hunt, and said that experience still lingers with him long after he issued a public apology.

"It's hard to explain what you go through when something like this happens," said White. "I've been there and done it. And then you get labeled. I'm labeled as a homophobe. They still come after me for that. It's the furthest thing from the truth. And if I was, I'd tell you, trust me."

But now that Torres has made peace with the UFC and gotten himself back on the roster, what is White planning to ensure these incidents don't happen again? Not much, as it turns out. At least, not officially. If seeing one of their own get cut for such a questionable use of social media didn't make enough of an impact, fighters might have to find out for themselves on a case-by-case basis, White suggested.

When fighters are trying to figure out what will and won't get them in trouble, he said, "It's common sense. And listen, sometimes we've got to go through stuff like this to realize it."

In other words, no formal policy for UFC fighters on matters like these is in the works. And why not?

"Because I don't want to," White said.