How Will Donald Cerrone Respond to 'Maniac' Nate Diaz? Even He Isn't Sure 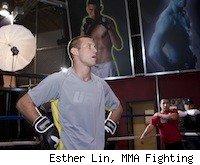 LAS VEGAS -- By now you've probably heard about the run-in Nate Diaz and Donald Cerrone had well before their fight at UFC 141 was ever agreed to, but if you haven't, here's the short version: Cerrone saw Diaz talking with his best friend and training partner Leonard Garcia one day in the Ultimate Fighter gym, so he figured he'd go up and say hello.

"I see Leonard talking to him and I'm like, maybe he's a cool dude," Cerrone told reporters on Tuesday. "I never met him before."

Cerrone introduced himself and offered his hand, which Diaz slapped away with a muttering curse or two, then walked off. Again, both men agree they hadn't encountered one another before this moment, and neither had given the other a specific reason to dislike the other. So what gives?

Allow Diaz to explain it in the form of a helpful hypothetical.

More Coverage: UFC 141 Fight Card | UFC 141 Results
"Let's just say for a second you're fighting some maniac from the street who's killed 20 people and they're just like crazy as hell, but you get a fair fight with him," Diaz said on Tuesday. "And he's just like, biting his arm off and talking crazy [expletive]. And then, you're going to fight this nice guy who goes to church and comes up and [says], 'Hey, nice to meet you, it's going to be a good fight.' Who are you going to feel more comfortable fighting?"

And before you ask, yes, Diaz does realize that, at least in this imagined scenario, he's the babbling, murderous maniac. But still, you have to admit that he kind of has a point.

For years Diaz has bristled at any attempt by the UFC, which he sees as intentional, to put him in contact with people he may fight at some point. From overlapping open workout schedules that force him to catch a glimpse of other fighters, to rides to and from the airport, everywhere Diaz looks he sees this subtle brand of sabotage. Why it seems to bother him so much more than other fighters is a question for another day, but you have to admit that he's come up with an effective way of shutting down any camaraderie before it starts.

By maintaining open hostility toward all potential opponents, Diaz said he prevents other fighters from feeling comfortable around him, which is true. From lightweights to welterweights (and probably a few guys both higher and lower on the scale), very few UFC fighters would tell you that being around either of the Diaz brothers is a comfortable experience.

The way Diaz sees it is pretty simple: "You stay on your side, I'll stay on my side."

Fortunately for him -- or perhaps unfortunately, depending on how you think about it -- Cerrone is just fine with that philosophy.

"Whatever he has to do in his mind to justify his fighting tactics, that's what he does," Cerrone said. "I don't care. I could fight Leonard, you know. That's my best friend, we'll go in there and get paid. That's what we do for a living. So what he has to do to get ready, whether that's talk [expletive] or not [be] friends with people, I understand where he's coming from."

The question for Cerrone is, what do you do with that? While "Cowboy" said he was expecting plenty of expletives and middle fingers when he gets in the cage with Diaz, he admitted he wasn't entirely sure how he'd react to it. After all, he's not exactly the wholesome choir boy from Diaz's hypothetical. Will it help him to give the vitriol right back to Diaz, or would that be playing right into his opponent's hands?

"And that is what I'm working on," Cerrone said. "I don't know. Do I get mad at him? Do I use what he's been doing all week, slapping my hand, against [him]? I've got to figure that out."

The failed introduction was still fresh in Cerrone's mind when he was offered a fight with Diaz, he said. He hadn't yet returned to his locker room when a UFC official mentioned Diaz's name as a possible next opponent, and his reaction was immediate: "Cool, let's go."

Only now that the simmering hostilities are about to give way to the sanctioned brutality they both get paid for, what is Cerrone supposed to do about Diaz's unique approach to relationships with colleagues? Even if you don't want to be the guy's friend, does that mean you have to give him what he wants and be his enemy? Is it smart? Is it helpful?

At that, even "Cowboy" shrugged.

Maybe it's the kind of thing you have to find out for yourself on fight night. Maybe once it starts, how you react to it isn't even entirely up to you.