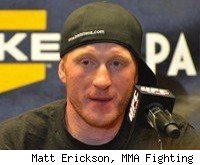 Ed Herman will look to continue his roll since returning from a severe knee injury, attempting to capture his third straight win since the layoff when he faces Clifford Starks at UFC 143 in February.

The UFC confirmed the fight's booking on Wednesday.

Herman (19-7) has looked spectacular in his first two bouts back from ACL and meniscus damage, finishing both Kyle Noke and Tim Credeur in less than one round apiece. His win over Credeur came via TKO in just 48 seconds, and he followed that up with a submission win against Noke with a heel hook.

Prior to the injury, Herman had struggled, losing three of his last four bouts.

Starks recently made his octagon debut with a unanimous decision win over Dustin Jacoby at UFC 137 in October. A former collegiate wrestler at Arizona State, Starks is unbeaten in his pro career at 8-0.