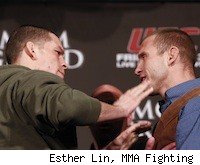 LAS VEGAS -- Donald Cerrone and Nate Diaz were playing so nicely together for most of Wednesday's UFC 141 pre-fight press conference. Then they came face to face for the customary staredown photo op, and that's when it all fell apart.

While the two posed for the cameras in one another's personal space, Cerrone muttered something to Diaz that made the Stockton, Calif.-native slap Cerrone's trademark cowboy hat off his head and then back him up with a shove before the two were separated.

And really, UFC president Dana White should have seen this one coming, but he too was taken in by their amicable demeanors up until that point, he said.

"I was expecting it," said White, who chastised himself for being too slow to step in. "But they were being so cool today, I didn't see it coming."

According to White, "Cerrone said something like, 'I'm getting in that [expletive] tomorrow' or something. ...That's why [Diaz] did it." But of course, this feud has deeper roots, and both men know it.

The story goes that, well before this fight was signed, Cerrone tried to introduce himself to Diaz when he saw him talking to longtime friend and teammate Leonard Garcia. Diaz slapped his hand away and swore at him before walking off, which didn't exactly make Cerrone hesitant to accept a fight with Diaz when it was offered shortly thereafter, he told reporters at Tuesday's open workouts.

But at Wednesday's press conference, it seemed like even Cerrone had realized that, when it comes to one of the Diaz brothers, stuff like that isn't personal -- it's just how they operate.

"I never met the kid. I went up to shake his hand. I understand where he comes from. He doesn't want to be friends. He doesn't want any kind of interaction with any guys who he fights, and that's just how he approaches his fights. At the time, I didn't realize that. ...Words were exchanged. The fight's signed, and Friday we're going to dance."

Diaz remarked that the incident had been made "into more than it really was," and Cerrone seemed to accept that explanation, saying, "I didn't understand at first, but if that's the way he approaches it. ...If that's what he has to do to get ready to fight, hey, hate me, love me, I don't care. We're fighting."

Maybe they weren't quite on the path to becoming best friends, but at least it was something resembling professional courtesy. Then came the staredown, the muttered comment, and the hat slap. While it might seem like good pre-fight build-up, White is not a fan, he explained later.

"There's going to be times when heated stuff happens," he said. "I'm not happy that Nate slapped Cerrone's hat off today. I don't like the guys touching each other [before the fight]. That's why I'm standing there. I'm not there to mug up into the camera. I'm there to make sure that [expletive] doesn't happen. I didn't do my job today, apparently."

White said he wasn't "overly concerned about it," but the negative appearance created by two fighters laying hands on one another in public days before they're actually supposed to is still "something that I think about, no doubt about it," the UFC president remarked.

Fortunately, this incident amounted to little more than an exciting few seconds in the lobby of the MGM Grand. And after all, it's not like they won't get a chance to settle their differences very soon, White pointed out, and in a fashion they both understand.

"Everybody knows how nasty the Diaz brothers are," said White. "But Donald Cerrone's not the nicest guy in the world either, you know what I mean?"