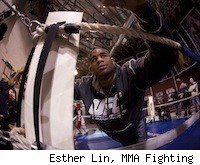 LAS VEGAS -- For two guys who are supposed to fight each other at UFC 141 in a few days, Alistair Overeem and Brock Lesnar sure don't seem to want to admit that they've been thinking about the other. In fact, if you believe Overeem, he's actually watched far fewer Lesnar fights since agreeing to the bout than he did when he and the former WWE star were in completely different organizations.

After a light workout at the UFC's Ultimate Fighter gym here on Tuesday, Overeem said he'd been "a fan of [Lesnar's] fights" since back when the big man first came on the scene.

"He was one of the fights I would watch," Overeem said. "...Because his fights, he is a figure that attracts attention. His fights are entertaining. He does bring it. He does always go for the kill."

Only now that he's had the last couple months to study up on Lesnar's seven-fight career, suddenly he's lost interest. He hasn't watched any footage of his Friday night foe to prepare for this particular bout. So he says, anyway.

Describing film study as something he decides to engage in or ignore based "on emotion," Overeem told members of the media that he simply hasn't felt like watching Lesnar's old bouts.

Kind of a strange way to approach pre-fight preparation, but if you dig a little deeper you get an answer that makes a little more sense. Or rather, you get two contradictory answers, neither of which gets you any closer to figuring out what the Dutch heavyweight is thinking.

For starters, he explained that while he sometimes likes to look at film and "check up on things" before a fight, he opted not to do it this time because "I think when you look at Brock, it's pretty straightforward what he's going to do."

This was an explanation that made sense, at least until he followed it up by saying that the danger of watching too much footage is that you end up ill-prepared for any non-straightforward tactics.

"Sometimes, like, you're caught up in, is he going to take you down?" Overeem said. "You don't want to get caught up in that movement. Because maybe he's going to stand up and trade punches."

In other words, Overeem doesn't need to study film because he already knows what Lesnar will do, but he also doesn't want to make the mistake of assuming that he'll do it. Got that?

But Overeem isn't the only one who's playing it close in the days leading up to the fight. Lesnar admitted to watching fight footage of Overeem, who he claimed not to know very well at all until the fight was announced, but said he mainly looks for tendencies rather than specific attributes. And anyway, Lesnar added, he pretty much assumes the guy must be good if he's fighting in the UFC.

"This is a guy who's threatening, obviously. You don't get into this company and get into this division if you're not a threat. This isn't bingo hall fighting, your local fights...It's the real thing and anything can happen."

Lesnar, as it turned out, was far more interested in talking about his life as a farmer than a fighter. He blissfully described ten-hour days in a combine as if they were a soothing vacation, and -- who knows? -- maybe they were, at least for Lesnar. After all, when he's locked in a combine with only the radio and his own thoughts he doesn't have to hear all our incessant questions about why he's still doing this or whether he's thinking of giving it up soon, the way he did with the WWE and the NFL.

Somewhat understandably, he's also getting a little tired of those questions, especially after he endured a surgery to remove 12 inches of his colon and still turned right around and got in the gym to prepare for this fight.

And that guy he's going to fight on Friday night? Yeah, he's here too. They might not want to think very much about the other right now, but in a few days it's going to be more or less unavoidable.