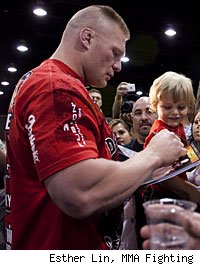 Will Brock Lesnar make a triumphant return to the Octagon after more than a year away? Or will Alistair Overeem's debut mark him as the No. 1 contender in the heavyweight division? Can Donald Cerrone finish 2011 with a perfect 5-0 record? Or will Nate Diaz hand Cerrone a difficult ending to his stellar year? Will Jon Fitch return to his steady pace of grinding out decision victories? Or will Johny Hendricks become the first man not named Georges St. Pierre to beat Fitch in the Octagon?

We'll attempt to answer those questions and more as we predict the winners at UFC 141.

When: Friday, the Facebook fights begin at 7 PM ET, the Spike preliminaries start at 9 and the pay-per-view starts at 10.

Brock Lesnar vs. Alistair Overeem
This fight is so fun for so many reasons. The obvious reason being that it's two enormous men who will attempt to smash each other for our entertainment, but the slightly less obvious reason is that they'll have two very different approaches to smashing each other, and that each man's greatest strength aligns well with the other man's greatest weakness.

For Overeem, the strength is that he punches, kicks and knees people really hard, and Lesnar's greatest weakness is that he doesn't react well at all when he gets hit really hard. In his last two fights, Lesnar has been finished by first-round TKO (against Cain Velasquez) and almost finished by first-round TKO (against Shane Carwin). In both cases, Lesnar did little more than cover up on the ground once he got leveled with a hard punch, although we have to give him credit for eventually recovering to beat Carwin. Overeem hits every bit as hard as Carwin and Velasquez do, and so Lesnar looks incredibly vulnerable on his feet.

However, Overeem has never shown that he can fair well against a good wrestler, and Lesnar is certainly that. Lesnar is also bigger and stronger than Overeem (or at least he is if he's completely recovered from his latest bout of diverticulitis) and so he can't be thrown around the cage the way many of Overeem's recent opponents have been. It's easy to picture Lesnar doing to Overeem what he did to Frank Mir at UFC 100: Getting on top of him on the ground, controlling him from the top, and eventually finishing him with punches.

And that's what I think he's going to do. This is a fight that could go a number of different ways, and Overeem probably has more different ways to win -- he could easily use his K-1 striking to TKO Lesnar, and I wouldn't rule out an Overeem win by submission either. But as long as Lesnar is completely healthy, I believe his physical power and wrestling prowess will be enough to take this.
Pick: Lesnar

Nate Diaz vs. Donald Cerrone
Cerrone jumped to the UFC at the start of the year with the rest of the old WEC stars, and he's promptly had one of the best years of any UFC fighter not named Jon Jones. Cerrone has already won four fights in 2011, beating Paul Kelly, Vagner Rocha, Charlies Oliveira and Dennis Siver. I think Diaz matches up better with Cerrone than any of those four, but I think at the end of an entertaining and mostly even fight, Cerrone will have landed more effective strikes and come out with a narrow decision victory.
Pick: Cerrone

Jon Fitch vs. Johny Hendricks
Fitch is finally returning to the Octagon after 10 months off because of a shoulder injury, and in Hendricks -- a former NCAA wrestling champion -- he might be facing the first opponent since Georges St. Pierre who can force him to abandon his usual tack of winning a decision through clinches, takedowns and top control. However, while Hendricks has much better college wrestling credentials than Fitch, Fitch is better at incorporating his wrestling in MMA. I like Fitch to win this one by decision.
Pick: Fitch

Vladimir Matyushenko vs. Alexander Gustafsson
Matyushenko will turn 41 next week, but he's still a sturdy gatekeeper in the light heavyweight division. Yes, he got wrecked by Jon Jones last year, but everyone gets wrecked by Jones. And that fight is Matyushenko's only loss since he returned to the UFC in 2009. Throw in the fact that Matyushenko's last two wins have been impressive first-round stoppages, and there's a lot to like about Matyushenko.

But there's even more to like about Gustafsson, a 24-year-old Swede who has all kinds of talent. This fight represents a solid test for Gustafsson, and it wouldn't be a shock to see Matyushenko take it, but I like Gustafsson to win by TKO and offer up another indication that he's a rising star at 205 pounds.
Pick: Gustafsson

Nam Phan vs. Jim Hettes
Hettes easily won his UFC debut in August, submitting former Ultimate Fighter contestant Alex "Bruce Leroy" Caceres. Now he gets a step up in quality of competition against Caceres's Ultimate Fighter castmate, Phan. Hettes is 9-0 in his MMA career, with all nine wins coming by submission, and in training at Greg Jackson's gym he's becoming a more complete fighter. Phan has never been submitted in 26 pro fights and probably won't be submitted this time, but Hettes is good enough that he should beat Phan by decision.
Pick: Hettes