As He Reflects on Loss to Michael Bisping, 'Mayhem' Miller Focuses on Uncertain Future 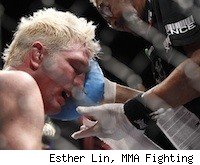 There's at least one thing Jason "Mayhem" Miller can feel good about when he looks back on his TKO loss to Michael Bisping in Las Vegas on December 3.

"I went out there and took my ass-whipping like a man," he told MMA Fighting. "I wore it like an Armani suit. I thought, I might have nothing left, but I'm going to go out here and try. I'm going to swing for the fences. And I did, but I came up short. That's the harsh reality of ultimate fighting."

It's also a shallow consolation, especially for a man who waited years to get this chance again, only to watch it turn sour on live TV.

There's no other way to put it: Miller looked awful. He knew it. The story was written all over his bloody, lumped up face when the bout ended in the third. Even if he'd managed to miss it somehow, his boss -- UFC president Dana White -- was there to remind him, calling it one of the most one-sided fights in UFC history, and hinting that Miller might get cut because of it. This prompted immediate protest from Miller's army of fans on Twitter, but it came as less of a surprise to Miller himself.

"That's his job," Miller said of White. "He has a bottom line to defend. If I was in his position, I'd be doing the same thing. ...That's just part of the damn game, right? If you don't show up, physically and mentally, then you get beat. And I got beat."

But why he got beat -- and why he looked so bad in the process -- is another question altogether. In a blog for his website, Miller alluded to mistakes made in training as well as in the cage -- mistakes he declined to elaborate on because, as he put it, "no one wants to hear my excuses."

After seeing how quickly Miller deteriorated in the cage, however, it's hard not to think that maybe he was more affected than he thought he'd be by the pressure of returning to the UFC for the first time since his 2005 loss to current welterweight champ Georges St-Pierre.

"I'll admit that," Miller said. "It felt weird walking out there. I didn't feel like my normal self, and it really showed. I couldn't get relaxed, couldn't perform to my potential. And I'm not taking anything from Bisping, but it was definitely not my best performance."

It also didn't help that, by the time he fought Bisping, Miller had been out of action for over a year. Though he insisted before the bout that ring rust wouldn't have any effect on a veteran fighter like himself, he found out otherwise in a hurry, he said.

"I didn't think that that layoff would do anything to me. But man, it was apparent that it did. I kind of freaked out in there. I've got to admit it."

After taking Bisping down and controlling him against the fence for much of the first round, Miller knew he was in trouble when he sat down on the stool between rounds and felt an unfamiliar sensation.

"I usually sit down on the [stool] and get a burst of energy back. But man, I sat down and I was sucking wind. I didn't feel like myself. I was like, man, what's going on with me here? I just couldn't get back refocused. In the training room, I did it just fine. But inside the Octagon, I didn't come back like I do. I was going, where am I? Usually, by the end of the 60 seconds I'm recharged. I wasn't recharged at all. I was more tired than when I sat down."

That's a bad feeling, especially when you're just beginning the second round of a five-round fight, and your opponent looks as fresh as when he walked out. Miller knew right then that he didn't have much left in the tank, but he spent the next eight-plus minutes trying to make the best of what he did have, and taking a beating for his efforts.

At one point, he even put his hands at his sides and let Bisping pepper him with shots -- a decision he regretted more for the pure stupidity of it than the physical effects.

"Genetically, I've been blessed with a hard-ass head," he said. "I didn't feel bad at all. I was just so tired that, by the time they stopped that fight, I was like, yeah, that makes sense. That was a good stop. I wasn't doing anything. It sucks to lose, but I was the one who was in control of that."

That's what makes this part -- the part that comes after a poor performance that left the boss unimpressed, to say the least -- so difficult. The fight might have been up to Miller, but the fallout isn't. Now he has to wait to find out what the UFC will decide to do with him, and so far the quiet on the other end of the line has been a little unsettling.

He hasn't heard from White since the UFC president asked him "what kind of car I was getting" for his TUF coaching gig, Miller said. And no one at the UFC has told him when he might get another fight or, if no such fight is in his future, get his walking papers. It's a disturbing bit of deja vu for a man who spent a year of his prime in limbo, waiting for Strikeforce to decide what to do with him. But then, it's not as if he has a lot of other options.

"It's their playground," he said. "If they don't want me in it, what choice do I have?"

For now, Miller said, he's trying not to dwell on all the worst-case scenarios and the negative what-ifs, just like he's trying not to beat himself up any more than he needs to over how terribly the Bisping fight went. Now that it's over, he said, the best he can hope for is a chance to fix his mistakes in the next fight. Whether he'll get that chance remains to be seen.