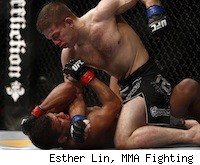 Paul Sass and Eddie Wineland recently suffered injuries and have been removed from the undercard of the Jan. 28 UFC on FOX 2 event in Chicago, the UFC announced Monday evening.

In for Sass against Evan Dunham will be Nik Lentz (pictured). Meanwhile, a new opponent for Johnny Bedford is to be announced.

With Wineland out, Mike Russow is left as the only true Chicago-area fighter currently scheduled on the card. Rashad Evans lives in downtown Chicago, but trains out of Imperial Athletics in Boca Raton, Fla.

Lentz (21-4-2) fought earlier this month, suffering his first UFC loss in a decision against Mark Bocek at UFC 140. Prior to the Dec. 10 fight, Lentz compiled a 5-0-1 (and one no contest) since starting with the UFC in September 2009.

Dunham (12-2) snapped a two-fight losing streak in September with a unanimous decision nod against Shamar Bailey at UFC Fight Night: Shields vs. Ellenberger.

Bedford (18-9-1) is a TUF 15 contestant who recently won his UFC debut in a dominant performance against the outsized Louis Gaudinot. Bedford found himself on this card as a substitute for Demetrious Johnson against Wineland. Johnson was removed from the card to face Ian McCall in the semifinals of the UFC's flyweight tournament.