Duane Ludwig Happy to Have UFC Record, Whether Commission Recognizes It or Not 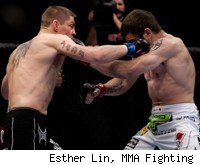 Duane Ludwig was at the post office when he found out that he was now a UFC record-holder.

"It was kind of funny, the timing of it," he said. The UFC lightweight was right in the middle of mailing off one of his signature 'Bang' jerseys as a Christmas gift for UFC matchmaker Joe Silva, when he got word that the UFC was officially recognizing his 2006 knockout of Jonathan Goulet as the fastest in the organization's history.

"We all know Joe's kind of shorter in stature, but I was so excited about what was going on that I almost sent him a double extra-large jersey," Ludwig said. "It just showed my mind wasn't on the task at hand."

For Ludwig, it meant a successful end to a campaign to get his eleven-second win over Goulet officially changed to a four-second stoppage, which would make his knockout the fastest in UFC history -- faster than heavyweight Todd Duffee's seven-second KO of Tim Hague in 2009 or Chan Sung Jung's seven-second finish of Mark Hominick earlier this month.

But then, a lot depends on how you define the term 'officially,' and who you look to to make that distinction.

It's a discussion we probably wouldn't be having right now if not for one suspect time-keeper's call in January of 2006. At a UFC Fight Night event at the Hard Rock Casino in Las Vegas, Ludwig fired off a single right hand that sent Goulet crashing head-first to the mat almost as soon as the fight began. When referee Mario Yamasaki rushed in to stop it, the clock showed four minutes and 56 seconds left in the first round. But somehow, when it was entered into the official record, Ludwig's win went down as an eleven-second finish rather than a four-second one.

To Ludwig, the difference seemed insignificant at first. He might not have even known about the discrepancy had UFC color commentator Joe Rogan not alerted him to it, he said.

"Joe Rogan actually MySpaced me -- this was back when we were all using MySpace -- and he told me, hey, you got screwed on the timing. I didn't really care at the time. I said, you know, thanks and I appreciate it, but I didn't really understand marketing back then."

It wasn't until three years later, when Duffee made headlines with a seven-second knockout that was immediately declared the fastest in UFC history, that Ludwig began to realize that there was real value in the distinction.

"When Todd Duffee got all that recognition for getting the fastest knockout record in seven seconds, I thought, well, that's actually mine, and in four seconds," said Ludwig. "Back when it actually happened, I didn't care about the publicity or anything, but now that I'm getting older and, I guess, wiser, I understand marketing a little bit and I know that can help me and help me help others."

Ludwig began to push for the timing of his win to be officially changed -- a goal he said was supported by UFC president Dana White. When MMA Fighting's Ariel Helwani asked White about it in an interview after UFC 140 in Toronto, Ludwig said, that's when things started to snowball.

"Ariel Helwani, he helped a lot because he was the first guy to publicly put Dana White on the spot about it. It wouldn't have happened any other way, so that was really cool of him."

On December 24, White sent out a tweet to Ludwig telling the fighter "for x mas you have the fastest KO in UFC history and it will be changed ASAP." The news made Ludwig "happy as a clam," he said.

But the question is, which records will reflect the change? The UFC has no control over the official time, which is kept in this case by the Nevada State Athletic Commission. That governing body has thus far shown very little eagerness to admit a nearly six-year-old mistake and make the requisite changes. The NSAC offices were closed due to the holidays on Monday, and requests for comment on the matter went unreturned, but UFC officials indicated that the change could be entirely internal, with the UFC altering the records on its website and recognizing Ludwig as the holder of the organization's fastest knockout regardless of whether the NSAC is willing to do the same.

And according to Ludwig, that would be just fine with him.

"A lot of people still don't even know that the UFC has these athletic commissions, that they're governed by a third party," he said. "And of course, we know that the commissions sometimes make questionable calls, so I think the more credible source is the UFC anyway. I'm a hundred percent fine with the UFC being the one to make it official. I'd prefer that, actually."

The way Ludwig sees it, it's not so much about re-writing history as it is about getting the recognition he feels he's already earned. As long as the UFC and MMA fans acknowledge what he did and allow him to honestly lay claim to the record, he said, he's unconcerned with what the athletic commission decides to do.

"Every athlete is always looking for a way to separate himself from the pack. This is a record that will probably never be [broken]. It never happened before, and it'll probably never happen again. It's definitely a cool thing to have next to your name," he said, adding, "It's also a good story to tell the kids. When I'm old and telling that story I can joke with them and go, you better go to bed because I can knock you out in four seconds."