Chad Griggs vs. Travis Browne Slated for UFC 145 in March 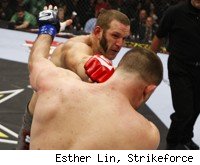 Chad Griggs' UFC debut will come against Travis Browne at UFC 145, the organization announced over the weekend.

The 33-year-old Griggs (11-1), who also works as a firefighter and paramedic in Arizona, went 3-0 in Strikeforce after he was plucked out of obscurity to be another opponent for Bobby Lashley in Aug. 2010. He would go onto beat Lashley, then another prospect in Gian Villante in February, followed by Valentijn Overeem in June.

Zuffa announced two weeks ago that Strikeforce's heavyweight division would cease to exist, and just like that, "The Grave Digger," who fought just once between Nov. 2007 and Aug. 2010, was headed to the big show.

Griggs will seemingly have to prove himself all over again when he meets the undefeated Browne (12-0-1), one of the UFC's top heavyweight prospects, in March. "Hapa" is 3-0-1 in the UFC, recently defeating Stefan Struve and Rob Broughton in his last two fights.

UFC 145 is expected to take place March 24 at Montreal's Bell Centre. The UFC has yet to announce a main event for the card.