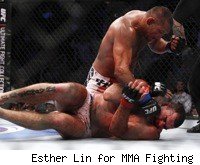 Ever since UFC 139 ended, I've been wondering why we loved it so much.

Was it because of the roller coaster ride that was Dan Henderson vs. Mauricio Shogun Rua? Or how about the vintage Wanderlei Silva performance against newcomer Cung Le? Perhaps Urijah Faber's dominant win over Brian Bowles in front of the partisan crowd did the trick?

Mix those moments together, sprinkle in the return of Ryan Bader, the emergence of Chris Weidman and Michael McDonald, and you've got yourself one memorable card. Certainly, we can all agree on that.

But I'm going to take things one step further. I believe UFC 139 was the 2011 Card of the Year because it came at the perfect time.

UFC 139, if you recall, happened just seven days after the organization's much-anticipated debut on FOX. This was the UFC's big coming out party on network television, and it seemed like everyone, especially UFC president Dana White, was anxious to see how America would receive our little sport that could.

So the UFC promoted the heck out of Cain Velasquez vs. Junior dos Santos. FOX promoted the heck out of it, too. Even though only one fight was to be televised, and even though the sure-to-be-great Ben Henderson vs. Clay Guida tilt was virtually ignored from a promotional standpoint, we got what was going on. We may not have liked it, but we (well, most of us) got it.

And as you know by now, the heavyweight title fight lasted just 64 seconds. Henderson-Guida turned out -- no surprise here -- to be one of the best fights of the year. The one-hour telecast generated record-breaking ratings, and it seemed like everyone in the UFC was, for the most part, pleased with the evening. It was a good night for the sport, but we couldn't help but wonder what might have been.

However, there was no time to relax because UFC 139 was just seven days away. Six former champions in the top three fights? The return of Dan Henderson? The debut of Cung Le? The UFC's first show in the MMA hot bed of San Jose, Calif.? This one seemingly had it all.

Yet, due to the importance of the UFC on FOX event, it was completely overshadowed. And we talked about that all week long. Over and over again. Honestly, we probably talked about it too much.

But then the fights came. Danny Castillo kicked things off with a dominant win over Shamar Bailey. Seth Baczynski kept things going with a sweet guillotine choke win over Matt Brown. Weidman's submission. Bader's knockout. You know the rest.

Even White, who joked earlier in the week that he was suffering from a UFC on FOX hangover, seemed more like himself after the fight. He was relaxed and quick to call Hendo vs. Shogun one of the best fights ever.

UFC on FOX was great, don't get me wrong. But UFC 139 was ... familiar. Just seven days after the biggest night in MMA's history, it reminded us why we started watching this sport in the first place. Not for the glitz and glamor of network television, but because MMA cards, more often than not, seem to deliver a great night of fights, top-to-bottom.

So when mainstream America went back to ignoring MMA, the UFC's best delivered. Originally, most of us thought it was a mistake to book UFC 139 a week after UFC on FOX. Now it's clear its timing couldn't have been better.

The rest of the field:

Honorable mention: UFC Live on Versus 5, Strikeforce: Barnett vs. Kharitonov.