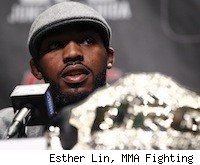 Earlier this week, The Associated Press, which provides sports news to millions of readers around the world, named its male and female athletes of the year for 2011. Not a single mixed martial artist was named on a single ballot. It's not as if non-traditional, non-stick & ball sports were not represented. Among those who received votes were sprinter Usain Bolt, surfer Kelly Slater and marathon swimmer Diana Nyad.

But not a single voter thought to write Jon Jones' name on his ballot.

Given the consistent dismissal of MMA by the mainstream news establishment, this oversight is hardly a surprise. In the past, we've always shaped such snubs as part of a larger argument about how far MMA has to go. But not this one. Mainstream sports, this time, it's on you.

I'm not arguing that Jones should have won the award. The winner, Green Bay Packers quarterback Aaron Rodgers, had an amazing calendar year. He won the Super Bowl, led his team to a 19-game win streak and has them in position to possibly repeat. Runner-up Justin Verlander of the Detroit Tigers won both the American League Most Valuable Player and Cy Young awards, the first pitcher to do that in 27 years. Third-place went to tennis star Novak Djokovic, who won 10 tournaments -- including three majors -- and finished the year with an exceptional 70-6 record.

Those three are all deserving of the consideration they received, but it's a sign of the blissful ignorance of the AP voters that Jones wasn't considered alongside of other vote-getters like Derek Jeter, Robert Griffin III and Dario Franchitti.

Jones, MMA Fighting's Fighter of the Year, had arguably the best calendar year in MMA history, winning four matches overall, defeating three former UFC champions and becoming the youngest title holder in UFC history. He wasn't exactly invisible doing it, either. He was a guest on The Tonight Show with Jay Leno, Jimmy Kimmel Live, and on the day of his title win, helped thwart a robbery, an act that resulted in major national attention.

If a boxer like Manny Pacquiao or Floyd Mayweather put together a year like that, you better believe that they would have earned votes.

But because Jones fights in a cage instead of a ring, his accomplishments go unappreciated and unrecognized. It's not like this was a small sample size; 212 alleged experts in sports cast ballots for the award.

Some might suggest that awards like this don't matter. After all, in the big picture, it's the opinions of a few. But they are also the same people who help shape the national conversation of sports. As local newspapers continue their slow death spirals, the AP is called upon to provide more and more of the coverage that was once done in-house. That means a homogenized voice spreading a message that is not always indicative of the true, wider picture.

It's the same voice that shut MMA out of the newspapers for far too long. But at least on that front, there is progress. In 2011, AP consistently began to provide papers with UFC event results. It might not be enough, but it's a start.

Judging from their awards balloting, they still have a long way to go. MMA always blames itself for its shortcomings, and points out all the instances in which we're snubbed by the mainstream. It's proof, we say, that there is still much to do in order to truly break through. That's partly true, but we must also hold the sports experts to a higher standard. In any part of life, there's only so long you can disregard something popular before you can be accused of ignorance, and we've long passed that stage. At some point, it's up to the mainstream media to meet us halfway.