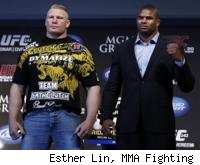 With Brock Lesnar vs. Alistair Overeem just a little more than a week away, THQ has provided a fight video simulation of the UFC 141 main event.

Truth be told, I have never been a big fan of these simulations. However, I couldn't help but feel intrigued by this one. I think this can only mean that I'm beyond excited to see these two beasts get it on next Friday night at UFC 141.

So after simulating the 25 bouts and coming up with some kind of average outcome, THQ determined that Overeem had a slight edge, winning via first-round knockout. Other highlights from the simulated fights:

* Lesnar attempted a total of 287 takedowns
* Two of Lesnar's 12 wins were by submission via arm triangle
* Overeem won by knockout 92 percent of the matches he won.

Anyhow, if you're into this sort of thing, and if you're as intrigued by this fight as I am, I suspect you'll enjoy watching the video below.