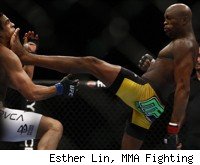 For most MMA fighters, if they even choose to apply it in their arsenal, a front kick is usually a blow to the body, typically to create distance against an opponent. But for UFC middleweight champion Anderson Silva, he'll utilize it to test your chin.

Anderson Silva's front kick to the face of Vitor Belfort is our choice for Knockout of the Year.

With Silva claiming the center of the Octagon, the two men were planted momentarily, engaging in a feeling out process. Then all of a sudden, Silva snapped his rear leg forward towards his Belfort's chin, collapsing him. Silva finished with punches for the referee stoppage at three minutes and 25 seconds into the fight for his record-extending 13th straight UFC win.

No one could have predicted the finish. Certainly not Belfort, who despite having his hands up to protect himself, was still caught off-guard when it was Silva's foot, not hands sneaking through Belfort's defense.


The game changed in a way after that UFC 126 fight. The front kick to the face became a weapon to look out for. Jon Jones found success with it. Yoshihiro Akiyama even tried it (unsuccessfully) in Belfort's next fight. And actually, the most spectacular follow-up occurred just two months after UFC 126, produced by none other than Silva's teammate, Lyoto Machida. 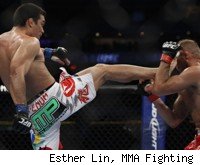 No. 2: Machida's crane kick knockout to retire Randy Couture at UFC 129 is the runner-up for knockout of the year. Machida's KO was more visually impressive than Silva's, but Silva deserves the higher honor for doing it first.

Machida's front kick is a crane kick from his karate background. And yes, the crane kick Ralph Macchio famously used in the Karate Kid movie. It's slightly different from Silva's kick in that Machida charges with his rear leg before finishing with a front kick with his lead leg. Silva didn't jump in his, choosing rather to directly headhunt with his rear leg. In Machida's finish, no follow-up punches were necessary to knockout Couture (and a tooth).

No. 3: Cheick Kongo def. Pat Barry (UFC on Versus on June 26)
In a shocking comeback, Kongo was dropped twice in the first round in a span of 13 seconds only to somehow -- while still recovering -- rise to his feet to land two right hands to send Barry to sleep.

No. 4: Mariusz Zaromskis def. Bruno Carvalho (Rumble of the Kings on Nov. 26)
Zaromskis pulls off a front somersault kick to stun his opponent, setting up a violent finish. Extra props for the high risk. Cause if you miss it, well ....

No. 5: Alexis Vila def. Joe Warren (Bellator 51 on Sept. 24)
Vila stormed into Bellator this year pulling the upset in the opening round of the bantamweight tournament against featherweight champ Warren. The finish saw a Vila powerful left hook to floor Warren, punctuated with an unnecessary punch and a very necessary tackle by the referee.