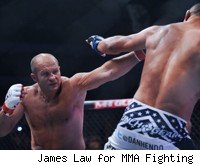 The best heavyweight in MMA history will make his return to the ring on New Year's Eve in Japan, when Fedor Emelianenko faces the former Olympic judo gold medalist Satoshi Ishii, and the fan reaction to that fight has been decidedly mixed.

On one hand, you have fans who loved seeing Fedor's glory days in Pride who figure that there's nothing wrong with seeing him back in Japan on New Year's Eve, which was once an annual tradition. On the other hand, you have fans who are disappointed that Fedor won't be facing a high-level opponent, as Ishii is just 4-1-1 in his MMA career and doesn't have anything close to the kind of MMA resume that Fedor has.

The reality is that this fight -- and Fedor's fight in Moscow last month against Jeff Monson -- is just what we're going to see from the 35-year-old Fedor at this point, as he enters the last phase of his legendary career. We're not going to see Fedor against Top 10 competition anymore, so we might as well enjoy watching him against the competition he will face, guys like Ishii and Monson who are perfectly respectable but far from elite.

Before I go any further, there's a little revisionist history to get out of the way: Some people like to claim that Fedor never fought high-quality competition, that all he did was "crush cans" in Japan. That's really not an accurate account of any stage of Fedor's career: He beat good opponents like Babalu Sobral and Ricardo Arona in Rings early in his career, beat good opponents like Antonio Rodrigo Nogueira and Mirko Cro Cop in Pride in the prime of his career, and beat good opponents like Tim Sylvia and Andrei Arlovski in Affliction late in his career. It's true that Fedor liked to mix in easy fights against the likes of Lee Hasdell and Yuji Nagata, but at his best he took on many of the best heavyweights in the world and beat them consistently.

What has changed is simple: Fedor is not at his best anymore, and now he's not in a position to fight the best heavyweights anymore. The sport's top heavyweights are signed to exclusive Zuffa contracts, and so they're not going to be fighting Fedor any time soon.

And really, Fedor shouldn't be fighting an elite heavyweight right now. After consecutive losses to Fabricio Werdum, Antonio "Bigfoot" Silva and Dan Henderson, taking a step back in quality of competition only made sense for Fedor, because he can't compete with the truly elite in the sport anymore. That's not a knock on Fedor, any more than it's a knock on Michael Jordan to say that he wasn't as good with the Washington Wizards as he was with the Chicago Bulls. It's just the reality with aging athletes.

The good news about the Ishii fight is that while Fedor is a heavy favorite, it's not a mismatch to the same extent that Fedor's last New Year's Eve fight was. In that fight, on December 31, 2007, Fedor was still the No. 1 heavyweight in the world, and seeing him easily submit the Korean giant Hong Man Choi in a Japanese freak show felt like a waste of time. Ishii isn't on Fedor's level, but Fedor-Ishii in 2011 is a more competitive fight than Fedor-Choi in 2007 was.

The other piece of good news is that this will be Fedor's fourth fight this year, making 2011 the most active year for Fedor since 2004, when he was the heavyweight champion in Pride. If you're a Fedor fan, seeing him fight frequently is not a bad thing.

So that's where Fedor is at this late stage in his career. He's no longer fighting the best of the best on the biggest stages in the sport, but if you've enjoyed watching him fight, there are worse things than seeing him in the ring with Ishii on New Year's Eve.