Chad Griggs Talks UFC Signing: I've Got to Prove I Deserve to Be There 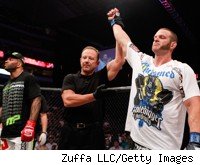 Chad Griggs was just starting to get comfortable in Strikeforce when the UFC came calling. Or rather, maybe it was Strikeforce that was finally getting comfortable with Griggs.

"I think after the last fight I started to feel good there," Griggs told MMA Fighting on Thursday. "They were kind of like, okay, fine. You're here. We're giving you some credit now."

But with Strikeforce's heavyweight division now going the way of the WEC -- and with Griggs' contract expiring not long after his third consecutive victory in the organization -- Griggs and his management were ecstatic about the chance to sign a new deal with the UFC, especially now that his stock is higher than ever.

"We've been talking for a while," said Griggs. "We've been throwing numbers back and forth for a little while because my contract was coming close to an end, so we were trying to figure out where I was going from here. I knew they were interested, and it was just a matter of if we could get the numbers right. I think we're both going to be happy. ...I'm excited about it, but now I've got to get in there and prove that I deserve to be there. It's time to put the work in and hopefully it pays off here in a few months."

Before getting the call to face Bobby Lashley in his Strikeforce debut in August of 2010, Griggs had been toying with the idea of dropping to light heavyweight. He was a bit on the small side for the heavyweight division, he figured, but the chance to face a big name like Lashley was too great an opportunity to turn down, even if he knew what Strikeforce was expecting out of the bout.

"Obviously Strikeforce doesn't want me to win," he told us before that fight. "But hey, they gave me the chance and now they've got to pay the consequences."

Griggs not only won that bout, but also notched first-round stoppages in two subsequent fights, including a TKO win in a thrilling brawl with Gian Villante in a Grand Prix reserve bout in February of this year, followed by another quick win over Valentijn Overeem in June. Now that he's signed a new contract with the UFC, he's planning to stay at heavyweight for the foreseeable future, he said.

"I'm not going to try and fix anything that's not broke. If I don't do well we may try something else...but for now I'll stay with what I know, and that's fighting the big boys."

He has no official date or opponent for his UFC debut, Griggs said, but there have been discussions about slotting him in for an event in March of 2012. Most importantly, he finally feels like he's in an organization that is interested in him as a fighter rather than as a sacrificial lamb, he said.

"But it's a plus and a minus. I'm going to a new league, so you've got to reestablish yourself and prove that you deserve to be there. It's like going to a new school, I guess. You want to fit in and do well, but at the same time I think they want to see me do well and they know I put on some good shows, so they're not sending me into the slaughter. They're giving me some respect."

Griggs said he hopes to be able to announce an opponent and date for his first UFC fight in the next couple weeks, and urged fans to "keep an eye out for me."

"I'm going to try and make some waves," he added. "Just put my head down and swing."

And why not? It's worked out well so far, even if the people signing his checks didn't always expect it to.