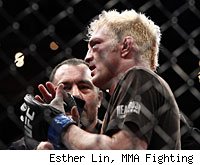 Jason "Mayhem" Miller has opened up for the first time since his loss to Michael Bisping at the The Ultimate Fighter 14 Finale.

In a blog post on his Web site entitled "Push Positive," Miller agreed with UFC president Dana White's critical assessment of his performance against Bisping and vowed to focus on the positives that came out of the loss.

"Dana White was right," Miller wrote. "He made some disparaging comments about my performance, and I agree with him. I displayed the worst of everything that night in the octagon. I was tense in round one and I locked up after that. I didn't perform to my potential, and I take full responsibility for it. That wasn't a UFC caliber performance, and I'm not happy about it- I won't, however, write a worthless diatribe on myself, because that is not constructive. I elect instead to take this misstep and make something positive out of it."

Miller's blog post is an honest and refreshing read. I suggest taking some time out to read it.

The UFC has yet to announce when the 30-year-old Miller, who's currently in Holland training with Team Golden Glory, will fight again.