Fighter of the Year: Jon Jones 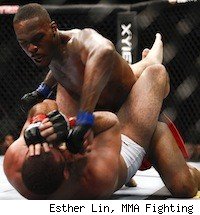 In October 2010, UFC president Dana White tried to slow down the expectations for Jon Jones. The light-heavyweight talent had just run through veteran Vladimir Matyushenko and the buzz around him had grown to the point where people were trying to project him into the title picture.

White, though, would have none of it. Jones was going to fight Ryan Bader in early 2011 and still probably have to win another 2-3 fights after that before fighting for the belt, White said. Just three months later, circumstances caused him to reconsider.

In a perfect storm of a day, Jones blitzed Bader and White discovered he needed a challenger for Mauricio "Shogun" Rua when Rashad Evans got hurt and Quinton "Rampage" Jackson declined the fight on six weeks' notice. Jones got the call and answered the challenge in historic fashion, annihilating Rua to capture the belt and become the youngest UFC champion in history.

Jones is the easy pick for fighter of the year, but in reality, his 2011 was more than that, arguably the finest single calendar year in MMA history.

Consider this: he became the first man in history to defeat three former UFC champs in a single year. But he didn't just beat them, he finished each one of them (and choked out Bader for good measure).


If you like statistics, Jones' dominance over the opposition can be proved numerically. In his four fights, he out-landed Bader, Rua, Jackson and Lyoto Machida by an obscene total of 233 to 56, according to FightMetric.

Keep in mind, those four came into their respective bouts with Jones with a combined winning percentage of .851, yet Jones won all 11 rounds against them and only Machida had any moments of success.

It's not easy to select a defining moment for Jones in 2011, but his title victory was certainly a moment of clarity for all the remaining skeptics. From the opening touch of gloves until the time referee Herb Dean pulled Jones away signifying the end, Jones' performance was nothing short of a masterpiece, MMA's equivalent of a perfect game.

Rua, a vaunted striker who was believed to have the standup advantage over Jones, was simply overwhelmed in every aspect. Jones out-landed him by a ridiculous amount, 102 to 11 by FightMetric's count. He took him down on all three attempts. He passed his guard repeatedly. And finally, he finished the fight for good with a liver punch that crumpled Rua midway through the third.

Showcasing his versatility, Jones became the first man in a decade to make Jackson tap out when he scored a fourth-round submission in his first title defense. And he saved his most mature performance for last, navigating his way through a rocky first round against Machida before dropping him with a straight left and finishing him by choking him unconscious in the second.

The year saw Jones jump from prospect to champion in seemingly an instant. Just a few months before 2011 began, White thought Jones wasn't yet ready to fight for the belt, but by the time it was over, White, like everyone else, had been converted.

"I don't know how you deny the guy anymore," he said. "He's literally walked through everybody. He fought four times this year, probably the nastiest schedule in the history of the company. He's incredible, man."

And an easy choice for 2011's Fighter of the Year.

2. Dan Henderson
When does time run out on Hendo? Judging from his 2011, it won't be anytime soon. The 41-year-old insists he's got a UFC title run in him, and his recent performances suggest he is indeed still a threat to either Jones or middleweight champ Anderson Silva. He started off the year in March by knocking out Rafael "Feijao" Cavalcante to take the Strikeforce light-heavyweight title. Months later, he moved to heavyweight and scored a TKO over Fedor Emelianenko, and he capped off his year by outlasting Rua in an all-time classic at UFC 139.

3. Ben Henderson
With dominant wins over Clay Guida, Jim Miller and Mark Bocek, Henderson proved that he belonged in the UFC's lightweight division and that he was a legitimate challenger to current champ Frankie Edgar. Just as impressive as his performance was his quick climb back from disappointment. It was just about a year ago when he lost to Anthony Pettis during the infamous "Showtime kick" match. The victory was supposed to get Pettis a title shot, yet it's Henderson who got there first.

4. Michael Chandler
It wasn't a huge surprise when Chandler beat Marcin Held and Lloyd Woodard to advance to the Bellator lightweight tournament finals, but his tournament title win over Patricky "Pitbull" Freire raised some eyebrows, and then Chandler one-upped himself by toppling champ Eddie Alvarez in one of 2011's best fights, a wild back-and-forth classic that Chandler closed out with a rear naked choke win.

5. (tie) Nick Diaz
What a wild ride 2011 was for Diaz, who earned early wins over Evangelista "Cyborg" Santos and Paul Daley before vacating his welterweight belt to move over to the UFC. He came to fight champ Georges St-Pierre, but never got the chance after he missed media commitments and the UFC removed him from the bout. As it turned out, St-Pierre ended up getting hurt and would have missed the match anyway, but Diaz decided to take a fight with BJ Penn and smashed him in a way that we've only see GSP do lately, building more anticipation for a possible future bout between the pair.

5. (tie) Junior dos Santos
There's no way to keep the new UFC heavyweight champion off this list after he demolished Shane Carwin back in June, and then headlined one of the most important shows in UFC history in November. Sure, the 64-second knockout of Cain Velasquez at the inaugural UFC on FOX show seemed more than a bit anticlimactic, but it also put into perspective just how dominant dos Santos has been. Since signing with the UFC, he has never lost a round.