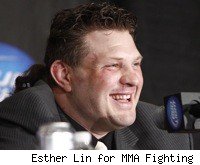 Fabricio Werdum's first fight back in the UFC will be against the new-look Roy Nelson. Both Nelson and Werdum confirmed the news, which was first reported last week by MMAWeekly.com, on Tuesday.

Werdum (14-5-1) last appeared in the UFC in Oct. 2009 when he lost via first-round knockout to Junior dos Santos. The promotion released the Brazilian following the fight, which led to him subsequently signing with Strikeforce. The 34-year-old went 3-1 in Strikeforce, with his defining moment coming in June 2010 when he submitted Fedor Emelianenko in the first round. Werdum was last seen in a Strikeforce cage losing to Alistair Overeem via unanimous decision. He went 2-2 in the UFC.

Nelson (16-6) showed off a leaner physique at UFC 137 against Mirko Cro Cop. "Big Country" picked up a much-needed win when he defeated the Croat via third-round TKO. The win snapped a two-fight losing streak for Nelson.

UFC 143 will be headlined by Nick Diaz vs. Carlos Condit. The main card will air live on pay-per-view.