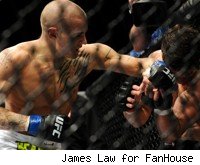 Ricardo Lamas has agreed to replace the injured Erik Koch against Dustin Poirier at UFC 143, the company announced Tuesday evening. The Poirier vs. Lamas featherweight tilt will take place at UFC 143 on Feb. 4 in Las Vegas.

The 22-year-old Poirier is a perfect 3-0 since dropping down to featherweight. He most recently defeated Pablo Garza via second-round submission at UFC on Fox last month.

Lamas (11-2) was also victorious at UFC on FOX, defeating Cub Swanson via second-round submission, as well. The 29-year-old Chicago-native is 2-0 since dropping down to 145 pounds earlier this year.

UFC 143, headlined by Nick Diaz vs. Carlos Condit, will air live on pay-per-view. Other fights announced for the card are Josh Koscheck vs. Mike Pierce and Roy Nelson vs. Fabricio Werdum.