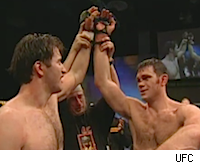 Spike TV announced on Tuesday that beginning Friday, March 2, from 9:00 p.m. to midnight ET/PT it will air highlights from the past fourteen seasons of The Ultimate Fighter. "The Ultimate Fighter Fridays," as they are calling it, will be televised at the same time as TUF 15 live on FX, which debuts March 9.

The move comes as no surprise as Spike aired UFC programming on its network at the same time as the UFC's debut on FOX and has already announced that it will do the same during the UFC's second show on FOX on Jan. 28.

Interestingly enough, though, Bellator Fighting Championships, which is owned by Spike TV's parent company, Viacom, will debut its sixth season on MTV2 on March 2, as well. However, according to David Schwarz, Spike TV's Vice President of Communications, MTV2 has not decided which time slot it will use to air Bellator events. That could very well be based on the time slot FX uses to air TUF 15 next year.

"We have to monetize the library," Schwarz said when asked about Spike's decision to counter UFC programming on FOX. "The UFC prefers that we keep the library and run the library."

Spike has the right to air old UFC programming for one more year before its contract with the promotion expires. The UFC could buy back the library to prohibit this from happening, but UFC president Dana White has already stated publicly that he is not interested in doing so.

Spike announced recently that Bellator will move to its airwaves come 2013.