King Mo Backs Off 'Cancer Patient' Comments, Wants to Fight Where Money Is 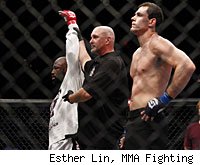 In September, "King" Mo Lawal said he viewed Strikeforce as something like "a dying cancer patient," saying he was just waiting for the promotion he's been fighting in since 2009 to die. But Lawal doesn't feel that way anymore.

With Lawal set to fight Lorenz Larkin on the January 7 Strikeforce card -- the first card on a new agreement between Zuffa and Showtime to keep Strikeforce alive through 2012 -- Lawal now views Strikeforce as alive and well.

"I was wrong to say it was a cancer patient. The cancer went into remission and Strikeforce is back," Lawal said on Monday's edition of The MMA Hour.

That doesn't necessarily mean, however, that Lawal will be part of Strikeforce in the long term. Lawal has made no secret that he'd like to be involved in bigger fights (and bigger paydays) in the UFC. And although he said his request for a fight with Rampage Jackson in Japan never came close to fruition, he said he's hoping for big fights and big money next year, after his current contract expires following the fight with Larkin.

"I've got one more fight on my contract and then my contract ends in February," Lawal said. "King Mo just wants to go where he can get paid and get paid without the check bouncing."


Lawal said he has no problem remaining with Strikeforce, and he wasn't upset to learn that Zuffa will continue to operate the UFC and Strikeforce separately, rather than absorb Strikeforce fighters into the UFC.

"I just hope they can get us good fights and get us paid well," Lawal said. "I'm not disappointed."

The 12-0 Larkin, who has come up through the Strikeforce Challengers series, represents an interesting challenge for Lawal. If Larkin can pull the upset, it would certainly hurt Lawal's negotiating position as he looks to sign a new contract, but Lawal doesn't see that happening.

"Get this win, which I will," Lawal said. "And then I'll see what the options are and see what happens."