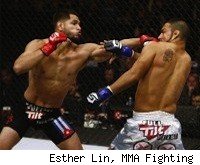 Strikeforce lightweight Jorge Masvidal will be sidelined for as long as six weeks due to hand injuries sustained both before and during his recent title fight loss to Gilbert Melendez, his manager Tina Vidal-Smith told MMA Fighting.

The Florida-based fighter, who dropped a unanimous decision in the main event of last Saturday's Strikeforce: Melendez vs. Masvidal card, suffered a severe contusion to his right hand about 10 days before the fight, and then damaged it further, incurring a ligament injury during the fight's first round, Vidal-Smith said.

On Monday, he had his hand set in a cast and a hand specialist advised him to spend the next 4-6 weeks on the shelf in order to heal the damage.

"He is hoping to work his way back up to fight Gilbert Melendez again when he is 100 percent, but stresses that Gilbert won the fight fair and square and extends his utmost respect to the current champion," Vidal-Smith said.

In his post-fight press conference comments, Masvidal made no reference to the problems but his performance suggested something could have been wrong. According to FightMetric, Masvidal was only out-struck 122-100 overall, but there was a stark difference in power punches.

Melendez threw 182 power strikes to the head, more than triple the number thrown by Masvidal, who fired off just 53. Normally an orthodox fighter, Masvidal was reliant on his lead left jab, as that particular punch counted for 183 of his 262 overall thrown strikes. He also switched to a southpaw stance several times but was unable to do enough to earn the judges' decision.