Brock Lesnar on Hunting Charges: I Don't Waste Meat...Look at My Dinner Plate 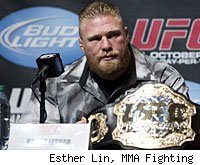 A lawyer representing Brock Lesnar entered a guilty plea on his behalf in a Medicine Hat, Alberta courtroom Tuesday, bringing an end to the Wildlife Act violations case against the former UFC heavyweight champion. Lesnar pleaded guilty to one count of failure to immediately affix a tag to an animal, and was fined $1,725 and given a six-month hunting suspension. Two other charges -- unlawful possession of wildlife and wastage of edible flesh -- were dropped.

In a phone conversation on Tuesday afternoon, Lesnar called the charges "A whole lot to do about nothing," and said he still didn't think he'd done anything wrong.

"As far as I'm concerned, I didn't disobey the law," Lesnar said. "I guess in other people's judgment, they saw it differently. At the end of the day, if they saw fit that I did something wrong, I'm a grown-up and I'll take my fine and go on with my life."

Lesnar said that the fallout from the guided excursion in November of 2010 hasn't soured him on potential future hunting trips in Canada, adding, "I'm an excellent hunter. I've been hunting since I was five years old, and at the end of the day, for God's sakes, I don't waste any meat. If you ever looked at my dinner plate when I was done eating you'd know that."

Ramona Robins, the chief prosecutor tasked with resolving the case, described Lesnar as "very cooperative" throughout her dealings with him, and noted that, as a non-Canadian citizen charged with violation of a provincial statute, "[h]ad he not cooperated the Crown could not have done anything to compel him to Court to answer to the charges."

The matter is settled for Lesnar, but charges still remain for his guide, Chad Stryker, who was charged with the same three offenses. Robins noted that Stryker could face stiffer penalties than Lesnar, "because he benefited commercially from the hunt and as a guide from Alberta should be held to a higher standard to know and appreciate the Wildlife Act and its various regulations than his client."