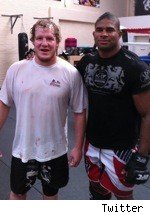 Alistair Overeem refused to talk about who he has brought in to help him train for Brock Lesnar on yesterday's episode of The MMA Hour, but apparently he doesn't mind if his training partners let the cat out of the bag.

Jared Rosholt, the winningest heavyweight in the storied history of Oklahoma State University wrestling, tweeted a picture of himself and Overeem Monday morning, confirming that the three-time All-American was one of the big wrestlers "The Reem" flew to Holland to help him prepare for Lesnar.

Rosholt, the younger brother of former UFC middleweight Jake Rosholt, has made a successful transition to MMA, thus far. The 25-year-old debuted in February and since then has gone 4-0, finishing all of his opponents in either the first or second round. Rosholt finished his collegiate career in 2010 with an overall record of 125-27.

Overeem recently had to move his camp from Las Vegas back to Holland to take care of his cancer-stricken mother. This is his first fight since severing ties with his long-time team at Golden Glory.