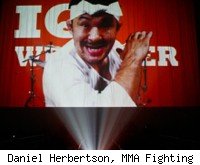 Kazushi Sakuraba is set to participate on the New Year's Eve "Genki Desu Ka!!" card in Saitama, Japan -- as a pro wrestler.

Sakuraba, who made a name for himself in the mid-to-late 90s as a pro wrestler shortly before becoming a Japanese MMA superstar under the PRIDE banner, will partner with Laughter7 teammate Katsuyori Shibata against Shinichi Suzukawa and Atsushi Sawada in a tag team pro wrestling match.

A familiar face on New Year's Eve, Sakuraba has competed in MMA bouts on six of the last eight New Year's Eves. Sakuraba, 42, has lost his last four bouts and hasn't recorded a victory since his win over Zelg Galesic at Dream.12 in October 2009. Better known for his accomplishments as a pro wrestler, Shibata holds an unspectacular 4-11-1 MMA record.

Back on the MMA front, the promoters recently announced a women's MMA bout with Megumi Fujii taking on Karla Benitez. Fujii (24-1) has won her last two fights to bounce back from a split decision loss to Zoila Gurgel in the finals of the Bellator 115-pound women's tournament in October 2010. Benitez (6-1) fights out of Spain and is coming off the first loss of her career.
The current "Genki Desu Ka!!" lineup is below.