Falling Action: Best and Worst of Strikeforce: Melendez vs. Masvidal 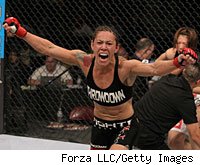 Strikeforce's 2011 came to a close on Saturday night in San Diego, but the organization will live on in 2012. Whether that's good news or bad news for the fighters on the roster remains to be seen, but this latest event did seem to be some kind of harbinger of things to come, for better or worse.

And now, a look at the winners, losers, and everything in between after Strikeforce: Melendez vs. Masvidal.

Biggest Winner: Cris "Cyborg" Santos
There aren't many ways to enter a bout as a 9-1 favorite and still exceed expectations, but by crushing Hiroko Yamanaka in 16 seconds, Santos found one. If anything, Santos is a little too dominant for her own good. After a year and a half out of the cage, she probably could have used a round or two of work just to stay sharp. Instead she went out there and Mike Tyson'd yet another overmatched opponent, leaving us to wonder whether there's any woman in the world who can possibly compete with the Brazilian. The powers that be seem to be eyeing Ronda Rousey as the next challenger, but Rousey seems savvy enough to know she'd be better off dropping to 135 pounds and chasing smaller, less terrifying prey. Now that Santos has laid waste to the 145-pound division, she might have no choice but to try and follow her down. If she can lose that much weight without the aid of a tapeworm, that is.

Biggest Loser: Jorge Masvidal
This might have been his last best chance to break out of the journeyman mold and claim some bit of greatness for himself, but he sure didn't fight like it. Word is that he went into this one with an injured hand, which might explain why he wasn't swinging for Melendez's brain stem with wild abandon down the stretch. Still, he had to know he was down on the cards and wasn't going to end it with takedowns in the final round, so what exactly was his plan for victory? Even with Strikeforce's lean roster, he'll have a hard time getting another title shot while he's still young and able. He needed to make this one count, and he didn't. Even with Melendez's eye swelling shut in the fifth, Masvidal kept fighting like he had two more rounds to make his move. It isn't easy to go for broke with an injured hand, but when you're running out of time to dethrone the champ in what might be the only shot you'll ever get, what other choice do you really have?

Most in Need of a Change: Gilbert Melendez
What's the worst part about his continued stay in Strikeforce? Forget the lack of money and attention, it's the dearth of quality opponents. You look around the Strikeforce roster and there's not a single potential challenger who Melendez wouldn't be a huge favorite against. And when you're the favorite, as he was against Masvidal, it's not always enough to win a smart, strategic decision. Not if you're trying to create a buzz and get fans to demand your presence in the UFC. You can't fault Melendez for fighting the way he did, but neither can you say that it upped his stock on Saturday night. Unless Strikeforce signs some new talent -- or the UFC loans it some -- Melendez is looking at more and more of these fights for as long as he's stuck in the Hexagon. If you want to be the best, you have to beat the best. And if you can't even get a fight with the best, then you need to absolutely smash the other guys just to stay in the conversation. It's a tough situation for Melendez, and it isn't getting any easier.

Most Improved: Gegard Mousasi
Looks like someone finally had enough of getting out-wrestled on the American MMA scene. After having that aspect of his game exposed by Mo Lawal (and, to a lesser extent, Keith Jardine), Mousasi clearly spent some time in the wrestling room and made some real strides of late. Granted, he's still not going to double-leg his way to a win over someone like King Mo, but maybe he can at least get good enough to stay upright against him. That is, maybe he can get there if only he'd start believing in himself a little more. After his decision win over Ovince St. Preux, Mousasi did his best to talk his way out of a potential title shot, implying that maybe there were others who might be more deserving. It reminded me of his demeanor after the draw against Jardine. He stayed in his seat well after the post-fight press conference ended, staring down at the table as his coaches tried to cheer him up. No matter how much they told him that he got robbed by the judges (which he did) or that he fought well (which he sort of did), he still looked and talked like a kid whose puppy had just been run over. It's nice to be honest with yourself about where you stand. It's also good to expect better and better performances from yourself. But at some point you cross the line from demanding to unnecessarily negative, and that doesn't help you. Cheer up, Gegard. You're not doing so bad for a 26-year-old pro fighter.

Least Improved: Showtime broadcast
You'd think that with as many Strikeforce events as the Showtime crew has done, they'd have it down cold by now. You'd be wrong. First they got off to a late start after the Super Six aftermath turned into a Wimbledon-style trophy presentation. Then, once the transition from boxing to MMA was complete, the simple task of reading the results of a clumsy Facebook poll proved more than any one person could handle. Between awkward interviews, weird sound miscues, and a broadcast team that seemed like it would have rather been somewhere else, it was a rough night. Even Pat Miletich, who's usually the very best ex-fighter commentator out there, had to be repeatedly dragged into the conversation by Mauro Ranallo. What's normally fun banter between the broadcast team became simply distracting, and you almost wished some producer would have stepped in and told them to play nice. I realize that broadcasting live sporting events isn't easy, and anybody can have an off-night, but if you compare Showtime's product to the one the UFC puts on pay-per-view more than 20 times a year, they aren't even close. It's like the difference between the picture of the cake that's in the cookbook and the half-sunken, dried-out mound you pull out of your oven after failing to read the directions carefully. If you want me to believe that Strikeforce is a top-tier organization, start with presentation.

Most Surprising: KJ Noons and Billy Evangelista
Who would have guessed that this would be one of the most exciting and competitive fights on the card? Noons and Evangelista mixed it up something fierce, and in the end the judges got it right when they gave the nod to Noons. But what's also surprising is the word that Noons was supposedly considering retirement (at least in theory) if he lost to Evangelista. I can understand feeling like he needed to win one -- after two losses in a row, he did -- but it's not like Evangelista is some chump that any decent fighter should be able to stroll through. He's a skilled, game opponent, and he showed it in the later rounds. Noons can be proud of that win, and with a few tactical changes here and there he's right back in the conversation at lightweight. Strikeforce's roster might be thin right now, but that's good news for guys like Noons. It means there's a short climb to the top of the 155-pound division, even if there's a heap of trouble waiting for you when you get there.