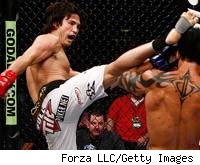 All three judges scored it 29-28 for Noons, who improved his record to 11-4 and said in the cage after the fight that he had wanted to put together an exciting fight for his hometown fans in San Diego.

"Billy is a terrific fighter," Noons said afterward. "That was a war. We put on a show."

More: Melendez vs. Masvidal Results | Noons vs. Evangelista Live Blog
Both guys got takedowns early in the first round, but both times they were on the ground only briefly without either man doing any damage. Later in the round the strikes started coming at a faster pace, and it was a fairly even exchange.

Noons started getting more creative with his striking early in the second round, throwing spinning strikes and wild punches, but Evangelista brushed that off and landed a nice counter strike that opened a cut on Noons' nose. The second round was fought entirely standing up and consisted of nearly non-stop exchanges of punches, and it was another tough round to call.

The third was the best round of the fight, with both men trying to finish it. For Noons that meant landing a hard head kick, while Evangelista sunk in a D'Arce choke and briefly looked like he had it in deep before Noons got out. In the final minute both men looked exhausted and the crowd cheered the ending of a good battle.