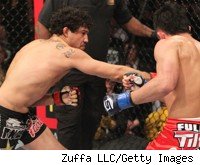 This is the Strikeforce live blog for Gilbert Melendez vs. Jorge Masvidal, the main event of tonight's Strikeforce on Showtime event from the Valley View Casino Center in San Diego.

In April, Melendez (19-2) retained his title by scoring a first-round TKO over Tatsuya Kawajiri. Masvidal (22-6) won both his Strikeforce fights this year against Billy Evangelista and K.J. Noons.

Round 1: The two circle each other early, Masvidal attacking the lead leg with a kick early. Melendez coming forward and lands the back end of a 1-2. Masvidal starting slow and Melendez dances around and comes with the same combo repeatedly. Masvidal fires off a knee, then a hook to the body. Masvidal drops Melendez with a sweeping leg kick, but Melendez springs up quickly. It's all kickboxing early, until Melendez catches a Masvidal kick and takes him down. He hunts a guillotine and Masvidal works free after 10 seconds. They trade in a flurry with :20 left as the pace picks up. Masvidal misses with a high kick as the round expires. Melendez takes it 10-9.

Round 2: Melendez counters a low kick with a straight right that knocks Masvidal backward. Melendez is throwing more power strikes and more volume overall. Even though some of his strikes miss or get deflected, he's setting the pace and Masvidal isn't active enough to steal rounds this way. Melendez hammers a couple of right hooks to the body. Masvidal flies forward with a knee but Melendez is ready for it. Masvidal is scoring with his jab and leg kicks, but those are his best weapons so far. Masvidal looks like he's trying to time a counter but never uncorks anything big. Melendez's activity is going to take round two as well.

Round 3: Melendez shoots in early, and Masvidal rejects him, then lands a right hook as Melendez is pulling out. Melendez with an uppercut and overhand that both land during a multi-punch combo. Masvidal is just too passive. Melendez throws in bunches while Masvidal is content with one strike at a time. Masvidal lands a flying knee but Melendez eats it. It knocked Melendez's mouthpiece out, but he simply picks it up and puts it in his mouth. Melendez comes forward with right hands. Masvidal with a left hook to the body as his upstairs-downstairs level changes begin to confuse Melendez a bit. Melendez's left eye is also swelling a bit. Masvidal switches to southpaw for the first time with less than a minute left. He lands a kick. That angers Melendez who comes forward with anger. Melendez throwing a lot but landing little. This was a much better round for Masvidal but still Melendez 10-9.

Round 4: A right hook works around Masvidal's gloves and to the jaw. It's the same old, same old for Masvidal, waiting to counter, but letting Melendez come forward with three or four combos before he fires back. Masvidal goes back to southpaw but abandons it in a hurry. Melendez is doubling and tripling up on the jab, occasionally firing off the right. Masvidal blocks most of them but the volume is going to win over the judges. Masvidal's jab is fairly accurate, but he only uncorks it every so often. Masvidal has a small mouse under his left eye. It's Melendez, 10-9.

Round 5: Masvidal with a nice uppercut and left hook early. A couple of knees from Masvidal as he shows a little urgency. Melendez backs away and restarts his offense. Melendez fires back but Masvidal now getting the better of the exchanges. Melendez shuts it down coming forward. Melendez's face is bloodied now. Melendez firing off right hands. With about :45 left, both men come to life and trade bombs. Masvidal gets a late takedown, Melendez pops back up and Masvidal throws a knee as the round ends. I'll score the fifth for Masvidal 10-9 but it's not enough.

Afterward, Melendez asks for some new challenges, and invites the UFC lightweight champion to his house for a scrap. "Come in my hexagon and let's fight," he said.