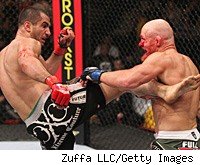 This is the Strikeforce live blog for Gegard Mousasi vs. Ovince St. Preux, a light heavyweight bout on tonight's Strikeforce on Showtime event from the Valley View Casino Center in San Diego.

Mousasi (31-3-2) fought Keith Jardine to a draw at Strikeforce: Diaz vs. Daley in April. Next, he stopped Hiroshi Izumi in July to defend his DREAM light heavyweight belt. St. Preux (11-4) is undefeated in five bouts under the Strikeforce banner.

Round 1: St. Preux opens with a head kick. Mousasi catches it. Mousasi lands a body kick moments later. Lots of trading kicks early. St. Preux looks a bit uncomfortable in there, reacting to every feint. Mousasi flashing his usual serial killer deportment. A St. Preux kick gets caught and Mousasi takes him down. Mousasi in St. Preux's half-guard. Mousasi with blows from the top. St. Preux lands a kick from the bottom as Mousasi's standing, but Mousasi quickly moves to side control with plenty of time to work. St. Preux tries to scramble to his feet but Mousasi drags him back down. Mousasi looks for the kimura but St. Preux powers out and ends up on top with :45 left. Mousasi quickly reverses and hammers St. Preux with stikes from the top. Mousasi gets the crucifix and rains down shots but runs out of time before he can finish. A 10-9 round for Mousasi.

Round 2: St. Preux shoots in early for a takedown. Mousasi defends and takes him down instead. Not the start St. Preux was looking for after a rocky first. Mousasi's in his half-guard. Elbows from the top. St. Preux has Mousasi's right leg locked down but Mousasi is able to inflict plenty of blows from the position. For some reason, the ref stands them up with two minutes to go. St. Preux scores with a knee but Mousasi catches it. The two jockey for position and St. Preux drags him down with 1:20 left. He fell into side control, and this is his best chance of the fight. Mousasi gets back to his feet very quickly though, and St. Preux will regret that missed opportunity. Another easy 10-9 for Mousasi.

Round 3: Mousasi's wrestling is much improved. He's taken him down a few times and outworked him other times. And just as I type that, St. Preux uses a switch and takes Mousasi down and into side control with 3:40 left. St. Preux mounts for a moment and lands a few elbows. Mousasi waits for space and works free. Back to their feet and Mousasi blasts a double leg and takes St. Preux down. Mousasi slowly works from the position. OSP scrambles and Mousasi tries an arm bar, ends up on bottom when he works free. OSP throws offense with an elbow. OSP tries a D'arce at the final horn but it's not going to be enough. It's another round for Mousasi 10-9.