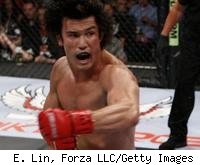 This is the Strikeforce live blog for Billy Evangelista vs. K.J. Noons, a lightweight bout on tonight's Strikeforce on Showtime event from the Valley View Casino Center in San Diego.

Both fighters are coming off losses to Jorge Masvidal. Noons (10-4) is on a two-fight losing streak, having lost to Nick Diaz before the Masvidal fight. Prior to the March loss to Masvidal, Evangelista (11-1) won seven Strikeforce fights.

Round 1: Both fighters are coming off losses to Jorge Masvidal. Noons shoots in early for the takedown and gets it, but Evangelista scrambles up quickly. Evangelista has the center of the cage and bulls Noons against the fence. Evangelista takes Nonos down with a high crotch, but Noons pops back up. Evangelista tries a standing guillotine, and Noons pulls his head free. Noons stuffs another takedown try. Noons lands a knee to the body and Evangelista closes the distance. Back to the middle of the cage and Evangelista scores with a hard left hook. Noons starting to get comfortable with a kick-punch combo, and lands with a straight right at the end. Evangelista digs low for the takedown. Noons defends but Evangelista lands an elbow in close quarters. It's a very tight round, but I score it for Evangelista as his early success was more than Noons' late performance.

Round 3: Evangelista lands the first big punch of the round, an overhand. Noons replies back with an uppercut. Noons flicks out his jab repeatedly and then drills Evangelista with a head kick. Evangelista takes it but Noons then adds a spinning back fist. Evangelista goes low. Noons defends and they're back to trading. Noons' jab is measured now and scoring repeatedly. Evangelista pushes forward as Noons tries to keep space. Against the fence, Evangelista tries a standing D'arce. It looks tight. Noons drops to his knees and twists out. Back to their feet and Noons hammers him with a right. Both guys running on fumes as their punches slow. Suddenly, Noons lands a crunching left hook, but Evangelista just smiles at him. They're trading blows as the round ends. MMA Fighting scores it for Noon, 10-9.