Gegard Mousasi Has Too Much for Ovince St. Preux 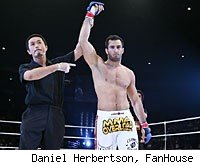 Ovince St. Preux is an athletic former football player who has promise as an MMA fighter, but he's not on the level of Gegard Mousasi.

That's what we learned at Saturday night's Strikeforce event, as Mousasi handled St. Preux for the better part of 15 minutes to win a one-sided unanimous decision. All three judges scored it 29-28 for Mousasi, and it easily could have been more like 30-26.

St. Preux showed that he's a tough customer who can take punishment, and Mousasi showed that he still has some work to do in his takedown defense, and that he too often allows his opponents get on top of him in dominant position. But make no mistake: Mousasi is the better fighter.

More: Melendez vs. Masvidal Results | Mousasi vs. St. Preux Live Blog
"I was sick before this fight, which took a lot of my conditioning away, but I think I did enough to win," Mousasi said.

The first four round was all Mousasi: He battered St. Preux standing up and then schooled him on the ground, nearly submitting him with a kimura and finally pounding away in a crucifix position until St. Preux was saved by the bell. It was a 10-8 round for Mousasi on my card.

At the start of the second round St. Preux shot for a takedown, and Mousasi did a nice job of reversing it with a trip and ending up on top. Mousasi was clearly in control, but midway through the round the referee made a surprising decision to stand them up. After a brief exchange standing it was St. Preux who got on top in side control on the ground, but he didn't do anything with it before Mousasi shrugged him off and stood back up. The second round was much closer, but it was another round for Mousasi.

Early in the third round St. Preux briefly had an opportunity to do something, getting on top in side control and then transitioning to full mount and attempting some ground and pound. But Mousasi blocked most of OSP's punches and soon got himself out of trouble. Mousasi played it safe for the rest of the round, knowing he had won. The way Mousasi cruised at the end allowed St. Preux to take the round, but Mousasi clearly won the fight.