Prater vs. Silva, Pyle vs. Funch Signed for UFC 142 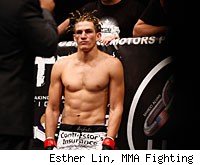 The UFC has called upon a couple familiar names to fill two voids left open to due injury at UFC 142.

In addition, the UFC Brazil Twitter account also announced that Ricardo Funch, who was released from the organization in 2010, has agreed to replace Paulo Thiago against Mike Pyle at the same event. Funch (8-2) is 0-2 in the UFC, while Pyle (21-8-1) is 4-3 inside the Octagon.

The Prater-Silva fight will serve as a homecoming of sorts for the 30-year-old Prater, who was born in Rio. He went 0-2 in WEC before getting released after an Aug. 2008 loss to Brock Larson. Since then, Prater (29-10-1) has fought for Shine Fights, MFC, and Strikeforce, among other organizations. This fight will mark his UFC debut.

Silva (13-1), who is considered to be one of the top prospects coming out of Brazil, looked impressive in his Octagon debut defeating Luis Ramos in just 40 seconds via TKO at UFC 134 in Rio. The win extended the 27-year-old's unbeaten streak to 10 in a row.

Funch fought once and won since his release from the UFC. He defeated Ryan Quinn via unanimous decision at Premier FC 7 just two weeks ago. Meanwhile, Pyle will look to get back on track after seeing his three-fight winning streak come to an end following a first-round TKO loss to Rory MacDonald at UFC 133 in August.

UFC 142, headlined by Jose Aldo vs. Chad Mendes for the featherweight title, airs live on pay-per-view on Jan. 14.