Strikeforce: Melendez vs. Masvidal -- By the Odds 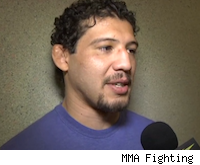 It's Strikeforce time again, for better or worse, and that usually means one thing to the betting MMA fan: opportunity.

I don't know if it's the built-in talent inequality on the roster or the penchant for one-sided squash matches, but it seems like Strikeforce always features fights with big favorites and hefty underdogs. If you know how to parlay the former and spot the latter, that could mean some profitable fight nights. If you don't, it's just another night of crying into the couch cushions.

Let's see how oddsmakers see it going down on Saturday night's Strikeforce: Melendez vs. Masvidal card.

On any Strikeforce card, both in the pre and post-Zuffa eras, you're bound to find some long odds to go with total mismatches. But while Saturday night's main event has the long odds part down, I doubt it's quite as much of a mismatch as it looks like on paper. Masvidal doesn't have the name recognition or the big wins that Melendez does, but he's still a tough, experienced fighter who's difficult to put away. That means Melendez could be looking at five hard rounds with this guy, which is plenty of opportunity for us to find out whether he took this challenge seriously enough in training camp. This is a tricky fight for Melendez, because there's just not that much to gain. Masvidal, on the other hand, could go from solid journeyman to potential star with one good night. Skill-for-skill, the edge has to go to Melendez. He's the all-around better fighter, and he should win this. But Masvidal is the kind of guy who won't give you anything. Melendez is going to have to go out there and take it.
My pick: Melendez. I can't bring myself to take the underdog risk on Masvidal, mostly because there are better options on this very same card. Speaking of which...

I get it: Mousasi's a familiar name and St. Preux is just some Challengers guy, right? Wrong. St. Preux is a genuine prospect, a gifted athlete, and maybe even a future Strikeforce champ with the right experience and adjustments. He hasn't lost a fight since 2009 and he's looking more and more comfortable in the cage of late, albeit against a series of opponents who seem as if they might have been selected for just that purpose. Mousasi, on the other hand, has looked a little uninspired in recent fights. He had that weird little draw with Keith Jardine, and he hasn't faced anyone really tough since he dropped the belt to Mo Lawal in 2010. He was the flavor of the month for a little while, but he just never progressed past a certain point and couldn't develop the appropriate sense of urgency about it, either. Maybe he deserves to be the favorite just based on the difference in experience against high-level opponents, but to give him Gilbert Melendez odds is insane. Not only does St. Preux have a chance, it's a pretty good one. I'd consider him a good bet at +190. At +290 he's a steal.
My pick: St. Preux. It feels like oddsmakers are just begging me to take their money here. I'd hate to disappoint them.

Oh, here we go. Hide your kids. Hide your girlfriend's delicate face. Hide anything you don't want smashed to pieces by the most intimidating fighter in women's MMA. "Cyborg" is back on the scene and it's looking like another squash match for the 145-pound champ. This time you can't blame matchmakers. There simply aren't many women out there who could give Santos much of a fight. Granted, Santos hasn't fought in a year and a half, while Yamanaka's been pretty active, but come on. You look at Yamanaka's record and there's nothing to suggest that she's ready for the intensity and the force of this one-woman wrecking crew. Nothing at all.
My pick: Santos. But at -900, I can't even put her in my parlay without feeling weird about it. It's like betting on a bull in a fight with an ostrich. You know you're almost certainly going to be right, but who wants to profit off something like that?

Here's one where you can actually learn something by comparing their performances against a common opponent. Both these guys dropped decisions to Masvidal in their most recent outings, though Noons' loss was the one that seemed to catch oddsmakers off-guard. This isn't one of those fights where they both do very different things, and it's a contest to see who can shut the other one down and make it into his kind of fight. Instead, it's a fight where they have similar styles and approaches, but one guy is just a little sharper at it. And who's that one guy, you ask? Easy: he's the one with the minus next to his name.
My pick: Noons. I don't see him blowing two in a row where he's the favorite, but I'll save it for the parlay.

- Justin Wilcox (-170) over Caros Fodor (+140). I'm still bitter that we didn't get a Wilcox-Cavalcante rematch after the unfortunate eye-poke ending to the last bout. This should be slightly less competitive.

The 'For Entertainment Purposes Only' Parlay: Melendez + Noons + Wilcox + Cole